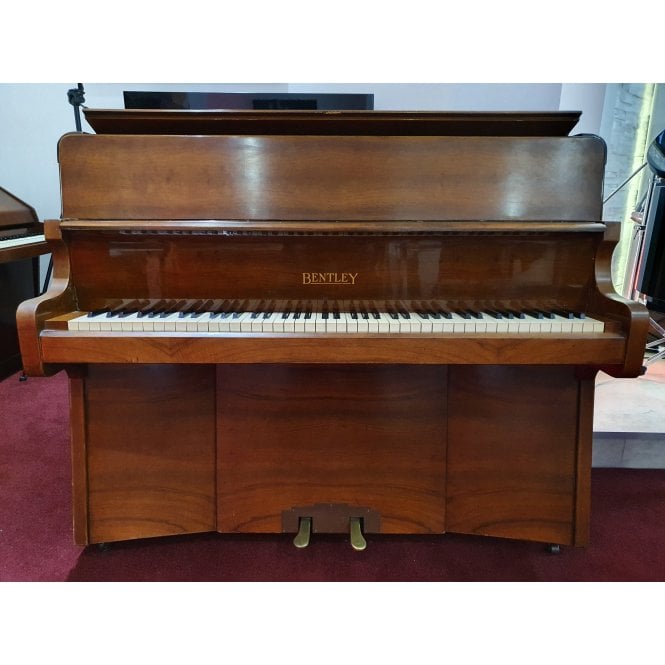 Here we have a beautiful, highly sought-after Bentley Resonaura acoustic upright piano. Built in the UK around the early 1960’s s it is fitted with 2 pedals for sustain & soft practice. This lovely piano has a compact 85-note keyboard and very good, responsive, medium-light Richard Check action. There are some marks on the cabinet but they do not take away from how great this piano is to play. This piano would be perfect for either a beginner or someone more advanced, it is tuned to concert A440Hz and has been regularly serviced.
Pete - Rimmers Music Edinburgh.

Here are the dimensions for this piano:

We include free UK mainland delivery to ground floor, with easy access with this purchase.

The piano has been tuned and prepared by our piano technician before delivery.

·         In 1906 the enterprise which was to become the Bentley Piano Company was founded in London by Douglas Grover, already the third generation of Grover piano makers, as his father and grandfather also produced Grover & Grover pianos. The earliest references date this business to 1830, and at its peak the annual output exceeded 500 instruments. A Grover & Grover from 1872 stands in the Geffrye Museum in Shoreditch.


·         In 1911 Douglas Grover moved his fledgling business to a well-known landmark in the Cotswolds, Woodchester Mills near Stroud. A mill stood on the site in 1605 and the still extant early deeds record fulling and grain mills with dye-houses nearby. A plaque, proudly displayed at the factory, commemorates the visit of HM King George III, Queen Charlotte, and the three eldest princesses in 1788. The handsome five-story mill erected shortly afterwards in 1804 proved an outstanding example of mill architecture during the heyday of the cloth industry along the Stroud valleys.


·         By the turn of the century demand for Stroud cloth had declined and empty mills abounded. The founder did not realise his far-sightedness when he moved from London, as only towards the end of this century has relocation away from the capital become fashionable. He brought with him a dozen leading workers and began training local labour.


·         The company was now known as the Stroud Piano Co. Ltd., and production expanded in the 1920s, as construction of keyboards began in 1921. In 1930, Douglas, now joined by his son Richard, launched a fresh overstrung design to be sold under the new Bentley name, followed four years later by a 4-foot 6-inch (1.37 m) grand. The Bentley models were an immediate success, so that during the 1930s the company became a major producer, with an annual output exceeding 3000 pianos.


·         In 1938, following a fire, the mill was rebuilt on a smaller scale and a further factory was acquired, which enabled the firm to become virtually self-sufficient for several decades, making actions, keys, hammers, soundboards, tuning planks and covered strings for its own pianos.


·         During the Second World War production was switched to aircraft components and the first jet, the Gloster 'Meteor', contained parts made at the piano works. After the war, the national interest demanded that the complete output be exported. Richard Grover swiftly developed world-wide markets for Bentley pianos, and in 1969 was awarded the MBE by Her Majesty the Queen for services to exports. It was a well-deserved recognition of a quarter-century spent in developing overseas business, for over 65,000 Bentleys are played in a hundred countries.


·         In 1962, David Grover, grandson of the founder, joined the business and spent a period training in the German piano industry. In 1963, the 'Compact 85 Contemporary', which in 1991 won the Music Retailers Association British Piano Award, replaced the 'Studio' model introduced thirty years earlier; the 1960s and 1970s were dominated by 'modern' casework designs, characterised by simplicity of line. Close on the heels of the Compact's success came new scalings and iron frames for the larger models. Today the well-proven Bentley range is still assembled around the strung back which resulted.


·         In 1979 a new building was added adjacent to the original mill, making possible later concentration on one site. Now various highly specialised components (such as iron frames, steel wire, soundboards, and tuning planks) are acquired from manufacturers supplying parts of identical quality, albeit of individual design, to prestigious makers in Germany and elsewhere.


·         The 1980s witnessed Bentley pianos playing a full part in the reintroduction of period stylings, as the taller piano returned to favour. The 'Belgrave' model, for instance, its traditional cabinet incorporating decorative curl mahogany and boxwood inlay, a superb specimen of the cabinet maker's art, is only one of a number of period designs. As awareness of the limitations of mass production spreads, more discriminating buyers seek that much-cherished personal excellence. The Woodchester factory, depository of decades of accumulated experience in making crafted musical instruments, supplied distinguished pianos satisfying this need.


·         Also during the 1980s, several well-known brands, the oldest with a heritage stretching back to 1835, were acquired as the company diversified its model range while at the same time manufacturing progressively more accomplished specifications. Bentley consolidated its status as a European maker of refined pianos providing decades of reliable performing life. Good value is a characteristic, since craftsmanship is combined with a high degree of mechanisation in many processes where machines contribute beneficially.


·         In 1989, forty percent of the production area was destroyed by fire. The new building built on the historic site is a worthy successor, and was opened by Her Royal Highness Princess Michael of Kent in 1991. The traditional exterior recalls local mill architecture, while the interior facilitates modern production techniques, for the company has always been forward-looking.


·         Pianos have now been made at Woodchester Mills for over eighty years - longer than at any other location in the United Kingdom, with over 160,000 pianos dispatched. Sons have followed fathers in the firm's employment - and remember, with pianos experience counts!


·         In 1991, the Bentley Piano Co. Ltd. celebrated eighty-five years of business, benefiting from a family tradition extending back five generations to the first part of the last century.

·         In 1993, the Bentley Piano Co. Ltd. was acquired by another prestigious company, Whelpdale Maxwell & Codd Ltd. Production was moved to the Clapham Park factory, where Bentleys were made, and follows the original specifications that create that unique Bentley sound.

·         In 2001, Bentley pianos moved back to Woodchester Mills to form part of the British Piano Manufacturing Company Ltd., along with Broadwood, Knight, Welmar, and Woodchester pianos.