Hitting The Right Beat: A Look At The Different Parts Of A Drum Kit

Drum kits are made up from a number of different pieces and if you’re a beginner, it can be quite daunting at first when trying to figure out what the role of each piece is. We’re going to look at each piece and give a brief overview of what each one does.

What are the different drum set parts?

These are the small wooden poles that are held in your hand like small swords, and are used to hit most parts of the drum kit in order to create a beat. 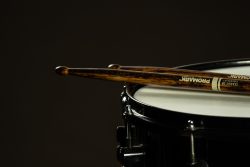 Often also called a drum throne, a drum stool is where the player sits in order to play a drum kit. By sitting rather than standing, a drummer’s legs and feet are then free to operate other parts of the drum kit that their hands cannot reach. The height of the stool can also be adjusted for players of different heights to comfortably play the drum kit. 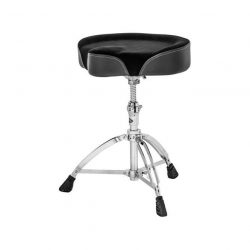 What is a snare drum?

The wide flat parts of drums are known as skins, and these are the parts of each drum that are hit with a stick to make a noise. On a snare drum, these are usually white and can often have a circle in the middle. Underneath the snare are metal wires which are clamped against the bottom of the snare. These both rattle when the snare is hit, as well as dampening the sound so that it does not last very long. This gives the snare its distinctive short and sharp sound when stricken with a drumstick. Most popular music is in what is know as a “4/4 time signature”,  which simply means that the pulse of the song follows a count of “1,2,3,4,1,2,3,4”which is then continuously repeated throughout the song. When playing drums, a snare is usually hit on beats 2 & 4 with the left hand, also known as the “back beats”. 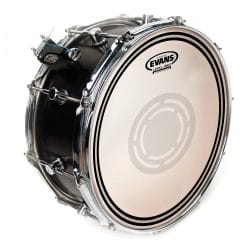 What is a bass drum?

A bass drum is often also called a kick drum. It is the largest drum situated on the floor in front of the right leg (for a right handed player), with the drum skin facing the players leg.

Because this is out of reach from the drummer’s hands, this is played by using their foot and a pedal which effectively “kicks” the drum, hence it’s name. As the player puts their foot down on the pedal, there is something called a beater which moves forward and hits the drum in the same way a drummer’s hands use a stick to hit the snare. Because of the size of this drum, noise generated is very loud and deep in pitch, with the sound lasting longer than a snare as it echoes inside the drum. This juxtaposition of drum sounds means that bass drum is often played on beats 1 & 3 when playing in a 4/4 beat, complementing the snare as the player alternates between the two. 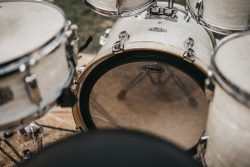 What is a hi-hat?

A hi-hat is made up of two cymbals and a foot pedal mounted on one stand. It is primarily made of two cymbals, which are metal discs that are hit to create a more high pitched or tinny sound when compared to drum pieces.

If a drum kit was to be broken down to it’s three most essential and basic parts, the hi-hat would be the 3rd part of that drum kit. They are held within reach on the hi-hat stand which is placed near the drummers left leg (for a right handed player) and feature another pedal at the bottom of this stand. Normally the two hi-hat cymbals are not touching one another, meaning that when they are hit they ring out and reverberate. When the pedal of the hi-hat is pressed down, the two hi-hat cymbals are pressed together or closed, creating a very short and tight sound when hit. 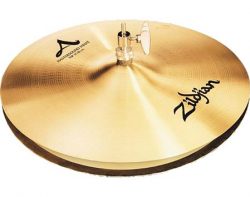 What is a Ride cymbal?

Located on the right hand side of the drum kit, the Ride Cymbal is the largest cymbal on a drum kit drum and is often played in a similar manner to a hi-hat. Unlike a hi-hat, a ride cymbal will ring out for longer when hit, creating what is often referred to as a “washy” sound.

A drummer will often switch to a Ride Cymbal from a hi-hat for different parts of a song in order to give them a sound or feel. Like a hi-hat, this is often played on each beat, and the “&” beat in between, otherwise known as the offbeat. 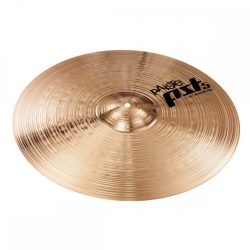 What is a tom drum?

The tom drum is also referred to as ‘toms’ or ‘tom-tom’. It has a cylindrical shape and, unlike the snare drum, does not have snare wire attached underneath, which means they ring out in a much more “boomy” sound when hit.

Toms are the drums which often look like smaller versions of the kick drum and are normally sat on top of the kick drum. Because they are smaller than a kick drum, the sound they make when hit is higher pitched. There are normally one or two toms sat on top of the drum kit, although some players will extend their kit with additional toms that are different sizes, which in turn create different pitch beats when hit.

Rather than keeping the main beat of a song, toms are normally used as part of a drum fill in the last bar or count of 4 in a song’s section. The purpose of a drum fill is normally to lead into a different section of a song and create a separation between the two.

There is normally only one Floor Tom as part of a drum kit, and is usually situated on the far right of the drum kit. Because the floor tom is quite a large drum and not used as regularly as other parts of the kit, it is placed here to be out of the way. Like the other toms, a floor tom is normally used during a drum fill rather than in a regular 4/4 beat. However because it normally is struck with the right hand stick, it is quite natural for drummers to play the floor tom in place of the hi-hat or ride. This creates a much more “boomy” beat than when using cymbals, and is often used when playing latin-style rhythms.

What is a Crash Cymbal?

A Crash Cymbal is part of the cymbal family, it makes a sharp ‘crash’ sound which is how it gets its name.

What is a Splash Cymbal?

A Splash Cymbal is a cymbal that makes a short, sharp sound. They are the smallest accent cymbals.

Crash cymbals are normally somewhere between a hi-hat and ride cymbal in size, while a splash is normally a smaller or similar in size to a hi-hat cymbal. Both of these cymbals are normally attached to separate long stands which hang over the two toms situated on top of the kick drum. Both of these are louder and higher pitched than other cymbals and also ring out or sustain much longer when hit. As such, these are traditionally used at the end of a drum fill, or in conjunction with the toms as part of a drum fill. 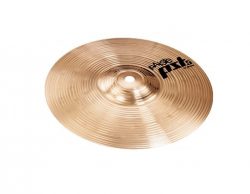 What is a digital drum kit?

A digital drum kit is a modern alternative to the traditional acoustic drum kit.

All the parts previously mentioned are viewed as parts of an acoustic drum kit, so the visual difference between each part can be easily recognised.  On a digital or electronic drum kit however, each of the pieces can look quite similar to one another, making it hard to tell which is which. If we exclude the drum module (the “brain” of the kit), all of the parts or pads on a digital kit relate to parts of an acoustic kit, and are normally assigned the same types of sound. This means that players who learn on one, can easily transfer their playing to another because everything is in the same place. This can be really helpful when having lessons, because often a student will learn on an acoustic kit but in order practice quietly at home will use a digital drum kit. This is something we often see with students at our music school, but in order to eliminate confusion our drum teachers at each of our 8 music schools teach using a mixture of the two. 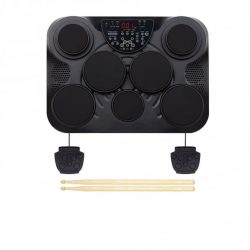 Before we end I should mention that not all drummers use the same sized kit, with some using more or less parts to it. Many players who play in styles of music with often simple drumming such as punk rock or indie, may often omit some of the toms or cymbals because they will simply not be used. This also has the added advantage of being quicker and easier to set up. On the other hand, drummers who play more complex music such as heavy metal or progressive rock are known to add many more elements to their kit. This can range from lots of different sizes of toms and cymbals, to new types of percussion such as a block or cowbell. Some drummers also add another pedal or even another kick drum to their kits in order to play the kick drum twice as fast with both feet, which is known as double bass playing.

On the whole however, the majority of popular music utilises the basic elements of a drum kit that we’ve listed here and by learning their different sounds, positions and where to use them, you can be well on your way with learning how to play the drums. If you’d like any more information on the parts of a drum kit, or would like to take your playing further by taking lessons with us, please call 01772 622111.