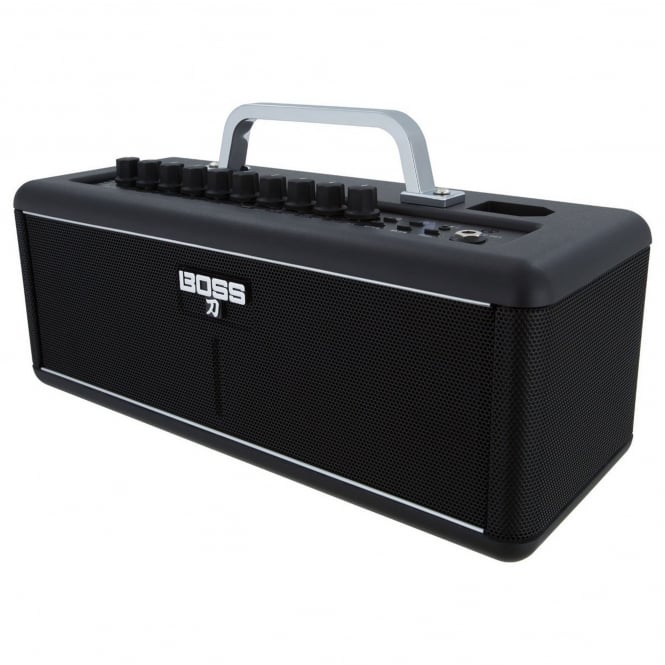 The Boss Katana Air Wireless Guitar Amplifier is the world's first fully wireless guitar amp, designed with low-latency digital wireless guitar technology newly developed by Boss to deliver super transparent tones and an ultra-quick response. The amp comes equipped with a transmitter which plugs directly into your guitar, and dual speakers to deliver an incredible stereo soundscape. Along with the other amps from Boss' Katana Series, the Katana Air features 5 powerful amp sounds and over 50 boss effects to choose from, with the ability to save up to 5 of your favourite combinations to recall when needed. The Boss Katana Air can be powered by AC or battery power, making it an extremely portable amplifier ideal for jamming and practicing.

The Katana Air is the world’s first totally wireless guitar amp, featuring low-latency digital wireless guitar technology developed by boss to deliver transparent sounds and an ultra-quick response. This amplifier comes with its own transmitter which plugs directly into your guitar, sending your guitar’s tone directly to the amp with no lag or dropout. The transmitter is also equipped with motion sensing technology to instantly wake the amp from its power saving standby mode, and it automatically enters standby mode when no activity is detected to conserve its charge.

The Katana Series of Amps from Roland’s Boss division embodies their pursuit of finding the ultimate rock sound, calling upon years of research and design to deliver redefined rock tones. Built using traditional craftsmanship with new and innovative designs, the Katana amps offer class-defying tones with an excellent touch response and presence. Taking inspiration from the Japanese sword of the same name, the Boss amps provide a smooth, cutting tone perfect for gigging musicians, as well as for recording and practising.

This Katana amp features a selection of five original and unique amp characters, offering a range of soundscapes from organic, vintage tones to modern, high-gain sounds. When set to clean, the Katana Air produces a beautifully natural and transparent tone, providing the raw sound of your guitar or pedals. Crunch will deliver a satisfying grit and response tone, while lead offers a wide gain range that suits many musical styles. The Brown amp character comes from Boss’ Waza amp series, generating a refined, high-gain tone. The acoustic mode enhances the Katana’s versatility, allowing an electro acoustic to be plugged in, optimising its tone to create an amazing sound.

The Boss Wireless Amp features a range of built-in boss effects that can be customised via the free Boss Tone Studio Editor software. With over 50 customisable effects to choose from, and the ability to load and keep 6 effects on board at one time, the Katana Air can use up to three effects at once to deliver a range of tonal possibilities. A selection of powerful controls and tone settings can be used to shape this amp’s sound, with the ability to store and recall your favourite amp and effects settings.

Pooling their years of research and design into the Katana Air, Boss has combined the use of traditional craftsmanship with innovative and breakthrough functions to create an incredibly powerful amplifier. Its dual custom-tuned speaker setup delivers a true stereo sound, with up to 30 watts of power delivering big, rich tones suitable for jamming and practicing. Its Bluetooth function lets you play music from your mobile device, allowing you to play along to your favourite tracks or simply use it as a high-quality Bluetooth speaker. The Katana Air also comes equipped with a stereo headphones/recording output with cab simulation, letting you record directly from the amp into your chosen music software.