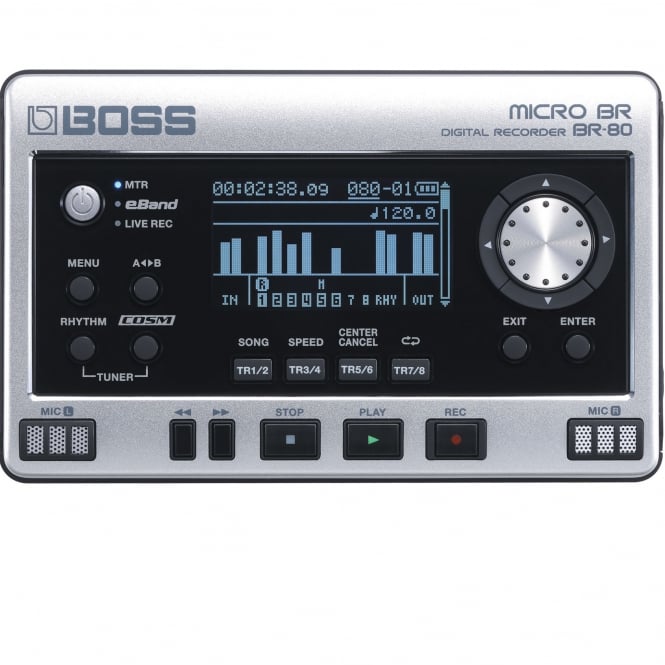 Code: Boss Micro BR BR80
Order within for delivery on Wednesday 6th July
Item in Stock Item out of Stock   |   Usually dispatched within 24 hours
Spot Products:
Loading...
Award Winning Retailer Est 1978 Supplying Musical Instruments For Over 30 Years
Prices Checked Daily Buy Today With Confidence
14 Day Return Policy We have made the process as simple as possible
Part Exchange Welcome We can offer you part exchange on your used items

The ultimate portable recording and jamming tool now with 8-tracks and an entire e-band added to the mix , JACK TO JACK LEAD & 2 YEAR Guarantee

The newest MICRO BR is small enough to fit in a pocket, but contains features for pro-level music production. It offers two tracks of simultaneous WAV-format recording, eight tracks of playback, and 64 virtual tracks for advanced editing and mixdown. High-quality stereo condenser mics are built in for up to 500 hours of recording time (with optional 32 GB SDHC card) for capturing song ideas quickly and rehearsals. Also included are dedicated inputs for connecting a guitar, a microphone, or any stereo line-level device.

Effects to create your sound

With a powerful processor at its core, the BR-80 delivers incredible effects processing with uncompromised sound quality. Onboard are world-class COSM guitar and bass effects, dedicated vocal effects derived from the VE-20 Vocal Performer, and a powerful suite of mastering effects. As with all BR-series recorders, effects are easy to dial in, letting users capture pro sounds with little effort. Going deeper, you can edit the effects in detail via an extensive set of adjustable parameters.

To aid songwriting, the BR-80 has a full complement of backing rhythm tracks in a large variety of musical styles. The rhythms feature top-quality drum and percussion sounds and are organised into patterns designed for use in different song sections.

The BR-80 also offers an extensive set of features for music practice and jamming. eBand mode provides a huge library of backing tracks and rhythm patterns to play along with, and users can import their own WAV or MP3 songs. Variable speed playback, variable pitch, and A-B Repeat features enable players to learn riffs and practise songs in different keys and tempos. In addition, the Centre Cancel function allows users to minimise the sound of guitar solos and vocals in pre-recorded tracks.

A USB port lets musicians use the BR-80 as an audio interface with effects for computer-based recording, and also to import and export WAV and MP3 audio tracks. Powerful software is bundled with the BR-80 including the eBand Song List Editor, and the BR Wave Converter.