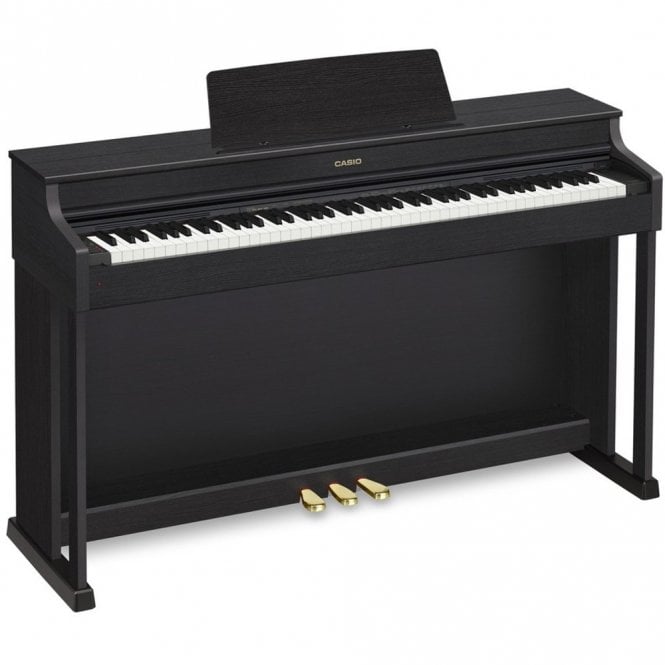 Well, where do I start with this great addition to Casio’s Celvieno  range of digital pianos , its fantastic. The sound quality is bigger and brighter than its little brother the Ap-270. This is due to the speaker system being nearly 3 times bigger, Casio have also added string resonance which really does add another dimension of authenticity to the sound of the piano. . The quality of the action with the 3 sensors per key is a joy to play, with great control of dynamics and expression. A nice feature on the Ap-470 is the ability to customise the piano sound to your own taste. A really useful feature I found was the Usb audio, where I could record my playing straight to a Usb stick !

The Ap-470 also has Casio’s Concert play feature on, giving you many of the great classicals played by a symphony orchestra, which you can play along to with the music scores you get with the piano. The piano has a total of 22 tones, with built in reverb settings. You can also combine any two sounds and split the keyboard if you wish.

With a sliding key cover and a lifting split top lid, for extra sound exspance and volume,  standard 3 pedals, headphone sockets for silent private practice, and with a impressive 20w + 20w output. The Ap-470 gives more value for money than other digital pianos at this price point.

Have the privilege of playing two Concert Grand piano sounds. Casio show their extensive attention to detail with their Acoustic and Intelligent Resonator technology. The AP 470 recreates every nuance and subtle tonal detail that you'd expect from a traditional instrument. This includes String Resonance, Action Noise, and even an opening Acoustic lid. You hear these advanced piano features in the AP 470's European and American grand piano tones. Each one is sampled to perfection and ready for both classical and contemporary music styles.

Get a taste of playing with a world-class orchestra. With Concert Play and the Casio AP-470, you can experience this standard of music. Choose from 10 beautifully recorded classical melodies, and play the piano alongside the thrilling sound of a symphony orchestra. Experience the professional with the Hall Simulator too. Using real scientific measurements, the Hall Simulator recreates the acoustic characteristics of some of the world's most famous concert halls, including Sydney Opera house and Wembley Stadium. With the touch of a button, you can hear how your playing would sound if you were playing there in real life.

Create high-quality recordings from home. With the AP 470 it couldn't be easier: Insert a USB memory stick, Press Audio Record and play. Then you're free to share your music with family, friends, or upload to the internet.

Casio understands that technology plays a large part in education, and learning to play the piano is no exception! Now you can connect your smartphone or tablet to your piano via a USB cable to unlock a wealth of educational features. You can choose between the 60 included PDFs of sheet music on the Chordana Play for Piano app, or you can even add your own PDF files. When connected via USB, you can configure your single or triple pedal unit as a page-turner, enabling you to concentrate on the performance. You can even take lessons using the on-screen keyboard and track your progress using a scoring system!

Get even more control over your instrument with Chordana Play. When you connect your Casio piano, you can now use your smartphone or tablet to finetune a multitude of features. You can control main settings such as what voice you are using, metronome settings, and reverb settings quickly and efficiently. If you're really wanting to tweak your tone, then you can start to experiment with hammer response, string response, lid settings, layering options, split keyboard, recording settings, plus much more!

The Casio AP 470 features Casio's Tri-Sensor Scaled Hammer Action II keyboard. Thoughtfully designed to deliver the most natural and authentic playing experience, the AP 470 is meticulously engineered to recreate the weight, touch, and resistance of a grand piano.

The digital piano is made with simulated Ebony and Ivory textured keys, replicating the touch and playability of an acoustic grand piano. And thanks to the all-new tri-sensor system, you can accurately capture the tonal character of your performance with the AP 470. Casio's AP 470 allows you to perform with total depth, character, and strength.

For quiet listening, the AP 470 now has two headphone outputs which are located on the front of the instrument. For those who are performing with other amplification, the AP 470 also features 1/4" left and right line outputs on the rear panel. The AP 470 continues Casio's tradition of providing "class compliant" USB connectivity on Celviano digital pianos. This enables the AP 470 to be used with Mac or Windows computers without the need for downloading drivers. Class Compliant USB MIDI also enables the AP 470 to be used as a controller with the Apple iPad simply with the use of Apple's Camera Connection Kit.