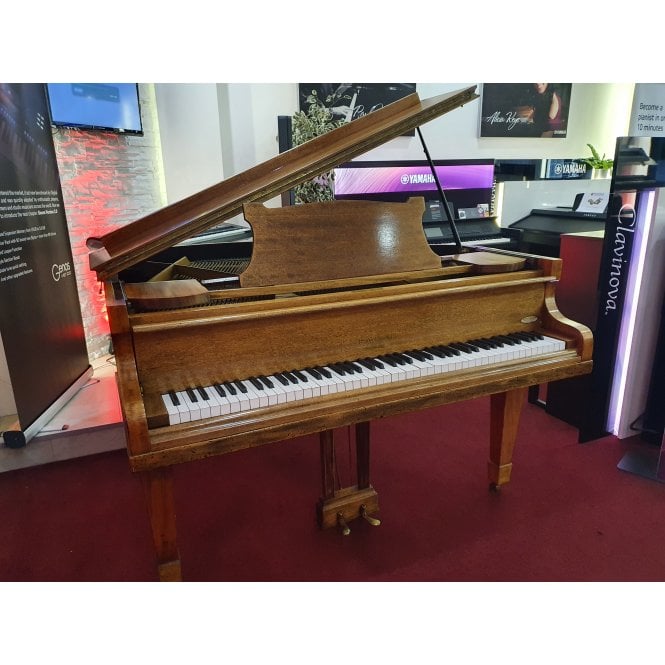 Built in London, this 88-note Cramer baby-grand comes in a beautiful satin walnut case. This case has been fairly heavily sun-bleached over the years, but has left it with a unique faded ‘vintage’ look that I find quite charming. The condition of the piano is fair. The Schwander action is light and responsive while the hammers have been reshaped and the interior has been extensively cleaned. There are various marks on the external cabinet, however this I feel only adds to its charm. This piano has a beautiful, bright tone with plenty of depth in the bass register, somewhat surprising considering its size. This piano would be the ideal starter-grand for someone looking for a stunning piece of furniture that will help them along their musical journey.
Pete Nicholson- Rimmers Music

It was founded in 1824 by the musician Johann Baptist Cramer in partnership with Robert Addison and Thomas Frederick Beale, the company then being known as Cramer, Addison & Beale. Johann Baptist Cramer ceased involvement with the business at the end of 1833, and in 1844 Addison broke from the partnership with Beale, going into business with Robert Hodson who had previously been in partnership with Lewis Henry Lavenu forming Addison & Hodson across the road from Cramer & Co. at 210, Regent Street, opposite Conduit St.
The business was then known as Cramer, Beale & Co.. William Chappell then went into partnership with Beale but broke the partnership in 1847 and the business was the carried on by Thomas Beale. Chappell rejoined the partnership and finally retired in 1861. The name Cramer, Beale & Chappell was used on publications at that time. In 1862 George Wood went into partnership with the Beales, during which time the name Cramer, Beale & Wood was used. By 1864 the Beales had left the company and the name Cramer, Wood, & Co was then used.
The main premises were at 201 Regent St and 67 Conduit Street, on the corner of Conduit Street and Regent Street.This address was associated with the company from the 1820s until the 1890s. In 1873 the company opened showroom premises known as "Cramer's Great City Warehouse" or "Cramer's City Warerooms" originally between 43 and 46, Moorgate later including nos.40-42.
From 1896 to 1901 the main premises were located at 207 & 209, Regent Street (these addresses having been used by the company since at least 1864), then moving to 126, Oxford St by 1902. In 1912, the main premises were moved to 139 New Bond St where they remained until the company was taken over by Kemble & Co piano manufacturers in 1960, who, for a limited period continued to use the "J.B. Cramer & Co." name.
Today Cramer pianos are made for delivery to the Far East, where the Cramer name has a good reputation, and they are still made to Kemble's traditional British piano designs.