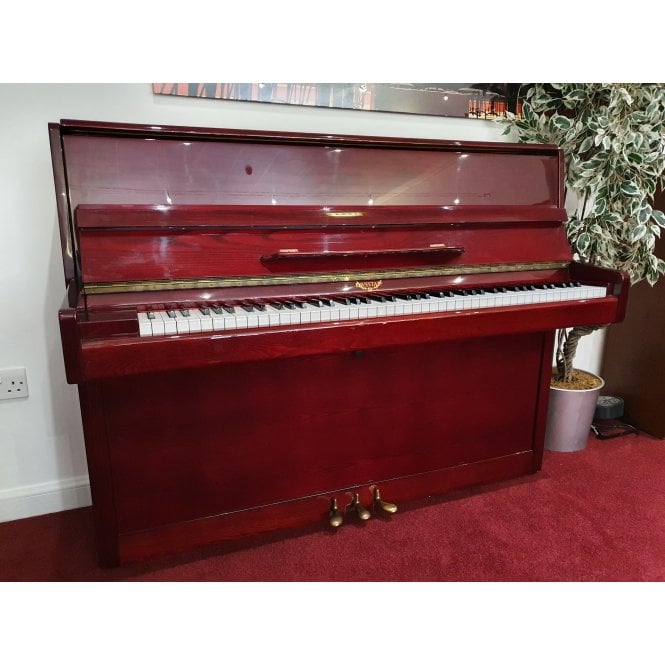 This is a fantastic Eavestaff acoustic upright piano presented in a Polished Mahogany finish. Built in the Yantai Longfeng Piano Factory, China in the early 2000s, it is fitted with 3 pedals for sustain, celeste & soft practise. This lovely instrument has a full 88-note keyboard and very good, responsive medium-light action. This piano is in excellent condition with no significant marks on the outside cabinet. The action is medium-light and responsive so would suit either a beginner or someone more advanced. A great piano to play & it won’t take up too much space!
Pete - Rimmers Music Edinburgh.

We include free UK mainland delivery to ground floor, with easy access with this purchase.

The piano has been tuned and prepared by our piano technician before delivery.

Eavestaff was established in 1823 in North London and in 1925 was taken over by the Brasted brothers as a way of raising their profile as piano builders. Brasted later merged with Boyd and in 1934 they introduced the Minipiano, this was sold using the Eavestaff name. The best of the Minipianos was the MiniRoyal.
In the 1930s Eavestaff made small grand pianos which were 150cm in length, mainly in mahogany and often with quite ornate twin gate legs.
At the end of the 1970s, Eavestaff pianos were made under licence by Kemble & Co and assembled at the Barratt & Robinson factory, Harringay, London. Eavestaff stopped making pianos in 1983, however the Eavestaff name lives on as standard upright pianos made by the Yantai Longfeng Piano Company in China.