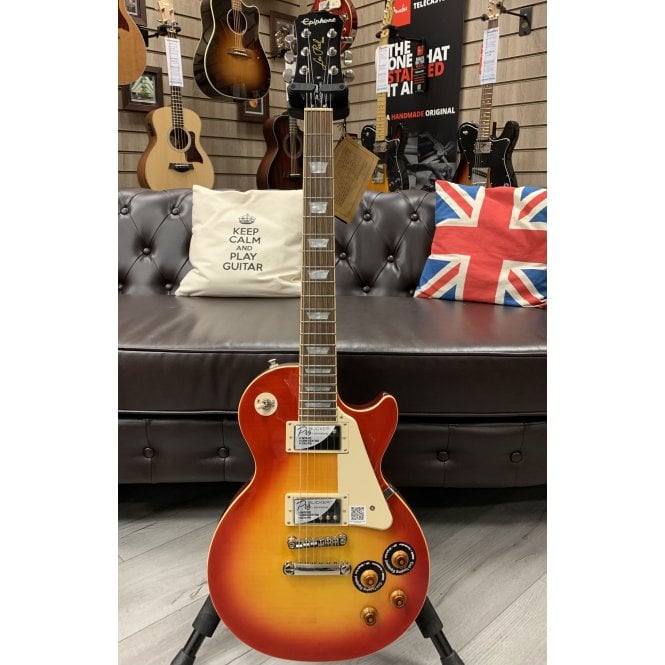 Here we have a beautiful Epiphone Les Paul Standard Plustop Pro in Cherry Sunburst. The guitar sounds awesome and plays great. The guitar is ex-display at the Bolton Store and has slight polishing scratches on the body. The guitar also has two Lacquer cracks where the headstock joins the neck (this is highlighted in the pictures and also explained more in the YouTube video). If you are looking for an Epiphone Les Paul this would be a fantastic purchase.
James - Rimmers Music Bolton.

Epiphone's history with legendary guitarist and innovator Les Paul dates back to the early 1940s when Les, working nights at the Epiphone factory on 14th Street in New York City, created what might have been first the solid body electric guitar, better known as "The Log." Over the next 15 years, Les continued to develop his dream guitar that would "sustain for days" and in the late '50s, Epiphone's historic Kalamazoo factory made that dream come true with the "sunburst" Les Paul Standard and its new pickup, the "PAF" humbucker. Players like Slash, Ace Frehley, Zakk Wylde, Jimmy Page, Alex Lifeson and countless others get their signature sound from a "sunburst" Les Paul and now Epiphone gives you a chance to experience that one-of-a-kind tone at an affordable price with the Les Paul Standard Plustop PRO. The Les Paul Standard Plustop PRO features Pro-Bucker TM "PAF"-style pickups with coil-tapping, new colors and a beautiful AAA flame maple veneer top for a vintage look with all the modern appointments that players expect from Epiphone.

The Epiphone Les Paul Standard Plustop PRO features a solid mahogany body with a AAA flame maple veneer top that delivers the classic tone and sustain that can only come from a "real" Les Paul. The body also features 1-ply cream binding on the top for a beautiful vintage look. Like all Epiphone Les Pauls'and unlike less costly designs'the Epiphone Les Paul Standard Plustop PRO features a 14 degree, angled headstock that gives you more pressure at the nut for longer sustain with less tuning hang-ups caused by "string-tree" gadgets. The mahogany neck has a 24.75" scale with a 12" radius and features a 1960s SlimTaper TM "D" profile with a glued-in neck joint for lifelong stability. The rosewood fingerboard comes with pearloid trapezoid inlays, 22 medium-jumbo frets, a 1.68" nut, and 1-ply cream binding.

The Epiphone Les Paul Standard Plustop PRO now features Pro-BuckerTM pickups for that one-of-a kind Les Paul sound. Pro-BuckerTM pickups feature Alnico II magnets, the same magnets used in sought-after vintage PAF humbuckers. Alnico II magnets provide a rich, warm tone with a sparkling high end and a solid low end. The Les Paul Standard Plustop PRO features a Pro-Bucker-2TM in the neck position and a Pro-Bucker-3 TM in the bridge position. The Pro-Bucker-3TM is slightly overwound to provide balance with the neck pickup and a bit of edge for lead work. Pro-BuckersTM emulate the sound of original PAF pickups which were hand-wound with a few extra turns of wire. Both the neck and bridge pickups now also feature coil-tapping, controlled by a push/pull volume control, allowing players an infinite variety of pickups sounds from single-coil bark to full humbucker bite. When winding humbuckers, Epiphone utilizes a double vacuum waxing process that ensures quiet operation, free from microphonic hum. The pickup is first placed in the specialized wax vacuuming system before the cover is placed on the unit to ensure that the wax fully penetrates to the very center of the pickup and solidifies all parts. After the cover is placed on, it is again given a second vacuum wax bath until the unit is completely saturated with wax. Epiphone uses only the highest quality parts for its pickups, such as ABS plastic bobbins, 1010 Cold Rolled Steel pole shoes and pole screws, Alnico magnets and the finest magnet wire available.

Like every Epiphone, the Epiphone Les Paul Standard Plustop PRO features a two year warranty backed by world famous 24/7/365 Gibson Customer Service. The Les Paul guitar is synonymous with Rock and Roll. No other guitar gives you the power, the sustain and the sound of a Les Paul. If it's got Les Paul's signature on the headstock, it's the real thing... Accept no substitutes! Authorized by Gibson USA!