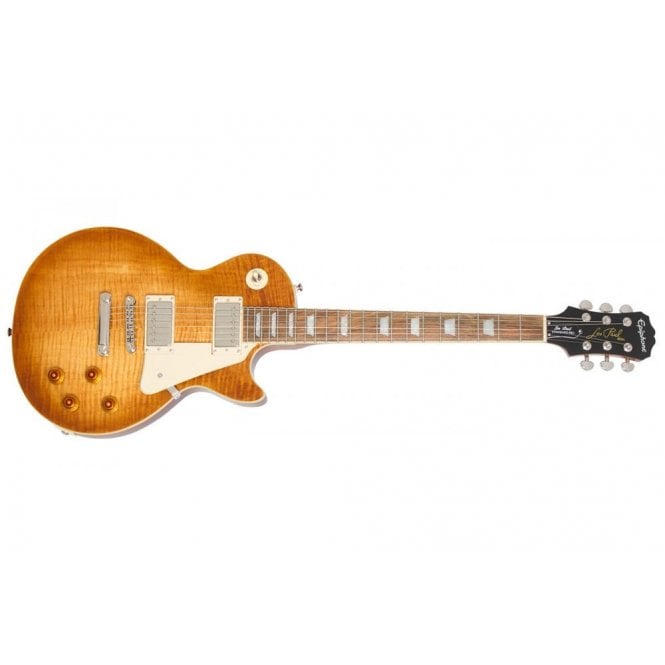 Loaded with a pair of Epiphone Pro-Bucker Pickups, the Standard Plustop PRO produces that iconic and recognisable Les Paul sound. The pickups consist of a Pro-Bucker-3 at the bridge and a Pro-Bucker-2 at the neck and deliver balanced tones with rich, full lows and tight sparkling highs. The Pro-Bucker Pickups feature Alnico II magnets, and are hand-wound to provide a PAF-Style sound with added bite and grind.

A mahogany body gives the Les Paul Plustop Pro a warm and resonant tone with great sustain, as well as plenty of depth. Mahogany delivers good levels of grind and bite, which works exceptionally well with punchy rock music. The mahogany body also provides durability, and a tone that will mature over the years for a long lasting investment. The body also features 1-ply cream binding on the top for a vintage look. The mahogany is topped with flame maple, which extends the mahogany's tonal range with enhanced brightness and twang, as well as adding beautiful aesthetics.

The Les Paul Standard Plustop PRO's neck is made from beautiful mahogany which is sturdy and provides good durability. The mahogany gives the guitar a richer focus, with warm and full undertones. It it coupled with a pau ferro fingerboard that tonally is the mid-way point between ebony and rosewood. It is slightly brighter than rosewood but with the same depth and warmth. The feel is similar to ebony and is smooth and easy to play.

The Epiphone Les Paul Standard Plustop PRO is equipped with rock solid hardware, consisting of a LockTone Tune-o-matic bridge and StopBar tailpiece which is fully adjustable. They are locked in place, which works to keep your tone reliably in tune, and improves sustain. There are also Grover 18:1 Tuners onboard for stability, which also make tuning fast and accurate.

The Les Paul first entered the world in the early 1940s, when the legendary guitarist created the world's first solid body electric guitar that was known back then as 'The Log'. Historically Les Paul's have been used by some of the most legendary guitarists the world has known, players like Peter Frampton, Pete Townsend, Jimmy Page and Marc Bolan to mention a few. Now most notably used by the likes of Slash and Black Label Society's Zakk Wylde and Green Day's Billy Joe Armstrong. Epiphone combines tradition, value and innovation to produce Les Paul Guitars that both look and sound unbelievably close to their Gibson counterparts, at a more affordable price. The Les Paul Standard Plustop PRO features Pro-Bucker™ "PAF"-Style pickups with coil-tapping, new colours and a beautiful AAA flame maple top for a vintage look, with all the modern appointments that players expect from Epiphone.