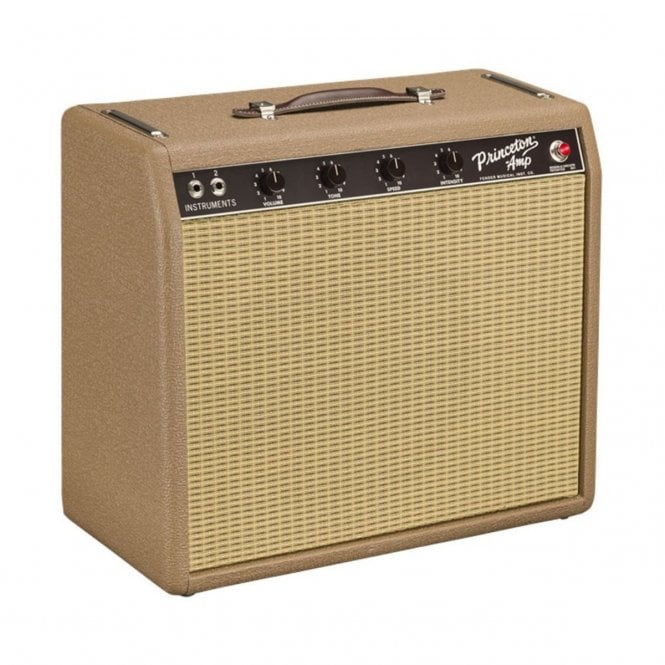 Painstakingly true to the original. The Fender '62 Princeton Chris Stapleton Edition Combo has been made to exact specifications. Only being made by Fender for a short while and never reissued, this brownface Princeton is unlike the tweed and blackface models, sitting between the two but with a warmer, woodier tone. Voiced beautifully to begin with, the Princeton doesn't need much attention. You get a tone and a volume with the other two knobs dedicated to speed and intensity of the tube tremolo, and its enough to make any guitar sing.

Throwing a Telecaster at it and turning the volume up brings the Princeton to life, giving rich harmonics, touch sensitivity with strong bite and rich sustain - thanks to pushing those 6V6s. Fender took to remodelling the cab exactly the same as they were originally, using finger jointed solid pine which gives the speaker a solid resonant cabinet from which it blooms. Like Chris Stapleton's original '62 Princeton, the speaker was upgraded from a 10" to a 12" and Emminence recreated this perfectly. The Princeton even includes the vintage blue Fender caps of the day - and of course, it is point to point wired, just like they used to be.

He's a big name. Chris Stapleton has had a long and fruitful career writing and collaborating on country songs. As both a singer-songwriter and guitarist, he has been gaining a reputation worldwide as one of the most popular country artists of today, and he has now collaborated with Fender to produce the '62 Princeton Stapleton Edition amp. A stunning model with all the high end features you would expect from the signature of such a legend, it will give you a dynamic range of ultra high quality tones to play with.

Refined, robust, classic. Being based on the original '62 Princeton amp, this 12W model contains many of the classic features which made its older brother so popular. It is hand wired with outstanding attention to detail, containing a fixed-bias 6G2 circuit and Stapleton's desired specifications for a unique, powerful, and totally ear pleasing sound. With Fender Vintage 'Blue' tone caps and Schumacher transformers, you can be sure that it will hold up in all situations, with its quality electronics providing the backbone of its quality tone.

It contains two 6V6 power tubes and two 12AX7 preamp tubes for that unbeatable tube amp sound and volume as well as a 5Y3 rectifier. Armed with these, you'll be able to produce a warm, rich sound which is filled with pristine tone and the most beautiful resonance.

Shaping your songs. The controls for this amp are intuitive, and designed to bring out all the natural goodness of its build and quality components. The volume dial lets you crank your music up (or down), whilst tone dial will change the nature and EQ of your sound for ultimate sonic control. In addition, there's a speed and intensity knob for shaping the tremolo effect which is built into the amp. The speed dial will determine the pulse and velocity of the tremolo effect, and intensity will decide how much of the effect is present in your overall sound.

A classic. Whether playing country-based licks or any other genre of music, the tremolo effect on this beautiful amp will give you a magical sound to work with. With the speed and intensity turned down, it will be a subtle, slow ebb and flow of tremolo, providing just enough of the effect to give your music an edge. Turn both dials up and the tremolo will be far more present, combining with your natural tone to produce a powerful effect. You can control the tremolo using the vintage style footswitch, which makes it ideal for live settings.

The pinnacle of quality. With features which would make any guitarist envious, this amp has an impeccable natural tone. The cabinet is made from resonant solid pine, giving it that powerful vintage sound. An upgraded Eminence 12" Special design 'CS' speaker also contributes mountains of tonal quality to the Princeton's sound, having a rich, vibrant reverberance. This model is sure to deliver one powerful punch and a reliably outstanding performance every time it is switched on.