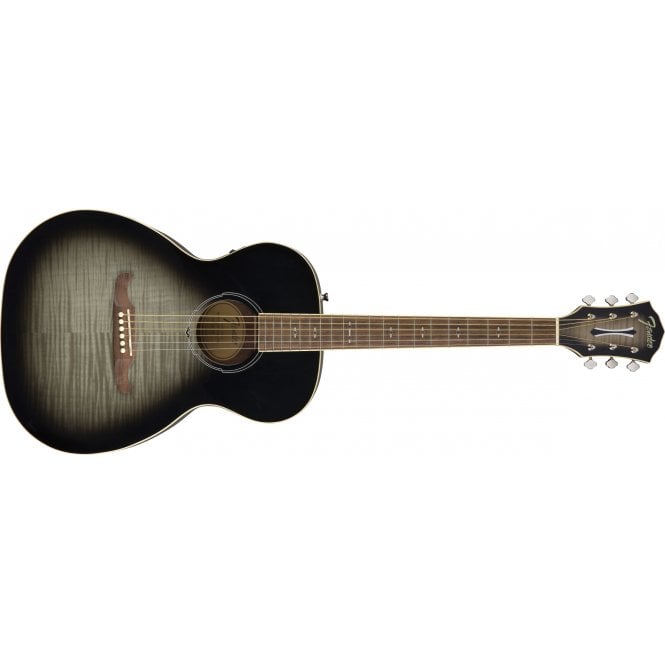 Code: Fender FA-235E Concert Electro Acoustic Moonlight Burst
Order within for delivery on Tuesday 31st May
Item in Stock Item out of Stock | Usually dispatched within 24 hours
Spot Products:
Loading...
Award Winning Retailer Est 1978 Supplying Musical Instruments For Over 30 Years
Prices Checked Daily Buy Today With Confidence
14 Day Return Policy We have made the process as simple as possible
Part Exchange Welcome We can offer you part exchange on your used items

The Fender FA-235E Concert Electro Acoustic, Moonlight Burst is perfect for gigging guitarists that need an affordable, stage-ready instrument with great tone and Fender's quality construction. With a laminated flame maple and laminated mahogany construction, the Fender FA-235E delivers a bright attack and plenty of bite blended with the sonically pleasing warmth of the laminated mahogany. The tone produced is able to accommodate numerous genres and playing styles, and combined with its concert body, players can expect a bright and trebly sound with a comfortable playing experience. Its concert body is also perfect for fingerstyle players due to its articulate tone and strong mid/upper-range. The Fender FA-235E also offers a visually stunning appearance, with a beautiful flame maple top, Moonlight Burst finish, pearloid keystone inlays, and eye-catching headstock design, the FA-235E is well-suited to live environments and is certain to look great on stage.

The Fender FA-235E features a visually striking flame maple top, which delivers a bright attack with plenty of bite. Its flame maple top also sings bright highs and a strong upper mid-range, perfect for a wide range of genres and playing styles. Furthermore, its stunning laminated top is paired with laminated mahogany back and sides, which produce a rich, resonant warmth that complements the bright attack of its maple top beautifully. Its mahogany back and sides also delivers a meaty mid-range, with punchy, woody tones with a depth that is certain to please most playing styles and techniques. Although the wood is laminated, it is still able to produce a sonically pleasing tone and is much less susceptible to warping over time.

The Fender FA-235E features a concert body, which offers a comfortable playing experience due to its compact size. Players are certain to find the FA-235E comfortable to sit with for long periods of time, including both seated and standing performances. Furthermore, its concert body produces a bright and trebly sound and responds greatly to fingerpicking techniques. Fingerstylists are certain to love the FA-235E's articulate tone, softer feel, and lower string tension.

Constructed from nato, the FA-235E's neck produces a warm and resonant sound that responds greatly to numerous techniques and playing styles with ease. In addition, the neck is topped with a laurel fingerboard which adds balance and beautifully natural overtones to the overall sound. Its laurel fingerboard also offers a smooth playing experience and is sprinkled with pearloid keystone inlays for added elegance.

The Fender FA-235E features a Fishman preamp system, which offers basic sound tweaking for live and rehearsal settings. Gigging guitarists or busking performers can simply plug-in to an amp or PA system for amplified sound. Its Fishman preamp features controls for bass, treble and volume, enabling players to add a little extra bass or treble to their tone.