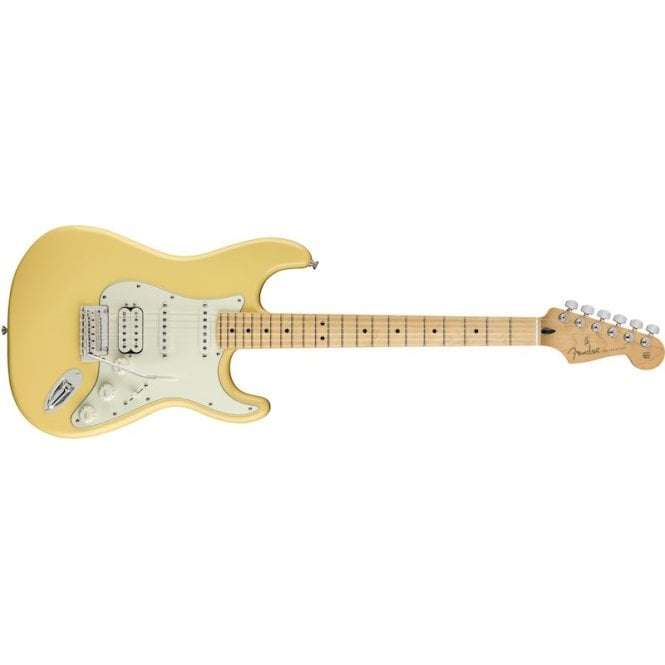 The Fender Player Series Stratocaster HSS MN Electric Guitar combines the classic design that has been a favourite of many for decades alongside modern appointments including a juicy humbucker in the bridge. The Player Series Strats also feature some unique additions that extend its versatile performance to cater to the latest generation of experimental guitarists.

The ergonomically shaped Stratocaster body is coveted by so many due to its exquisitely executed contours and curves in all the right places. Whether you prefer to wear yours high or sling it low, the Strat' rests just right against you during performances, removing any obstacles so that you can get on with doing what you do best.

The body is crafted using alder, a Fender favourite due to its impressive tonal versatility and lightweight feel. For those who need a guitar that can stand up to gigging pressures night after night, then alder is a welcome performance partner. The paintwork is protected by a slender coating of gloss polyester, which is paired with a 3-ply parchment pickguard to stunning effect.

Joined to the body is a responsive yet robust maple neck, which is shaped to the modern "C" profile that allows it to sit sweetly in the hand. The satin urethane neck finish prevents stickiness from building up and impeding your movement to present a lightning fast feel. The generous 25.5-inch scale length maintains string tension securely for a consistent response throughout.

Married to the neck is a bright-sounding maple fingerboard, which is home to 22 medium-jumbo frets with dot position inlays to guide your way in style. The addition of the 22nd fret affords great flexibility when laying down licks and riffs, giving you increased potential for silky smooth soloing in the upper register. The 9.5-inch fingerboard radius offers a flatter surface to lay down riffs and licks on, allowing you to execute string bends without resistance.

The Player Series Stratocaster HSS is so called as it is equipped with an Alnico 2 humbucker in the bridge position and a pair of Alnico 5 Strat' single-coils in the neck and middle positions. The range of tones available takes you from brittle yet articulate to fat and thumping. Whether you're cruising through country, riffing through hard rock or smashing out some searing solos, the Player Series Strat HSS is prepared for anything.

The Fender Player Series Strat' features a refined 2-point tremolo design, which delivers delightfully smooth control over vibrato. Working in partnership with the standard cast/sealed tuning machines and synthetic bone nut, the bridge upholds tuning integrity consistently, whilst optimising intonation and sustain dutifully. Every model is setup with Fender USA strings, so that you can get playing as soon as it arrives.