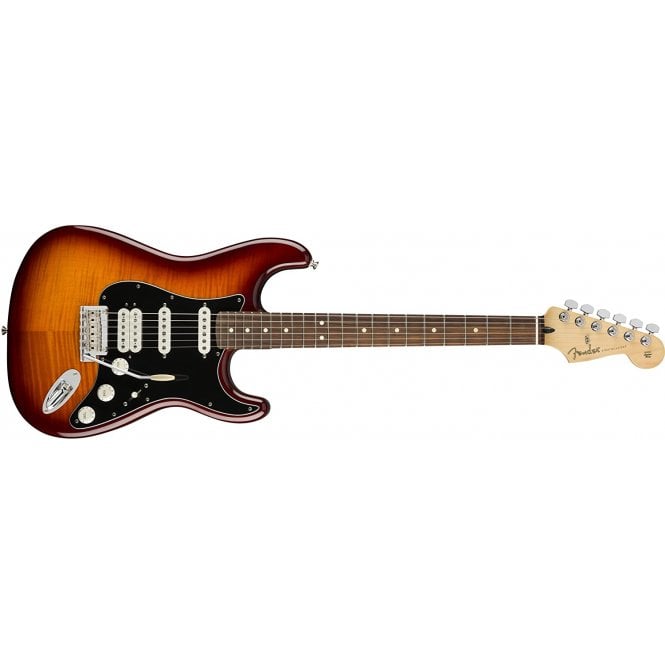 The Fender Player Stratocaster HSS Plus Top PF, Tobacco Burst is designed for the aspiring guitarist, featuring Fender's iconic tones and style coupled with modern components. The classic Stratocaster body is crafted from alder, delivering a well-balanced, and dynamic tone. The alder is also topped with a flame maple veneer, which brings enhanced brightness as well as visual appeal. The maple neck enhances the tone with plenty of brightness and sustain, whilst the pau ferro fingerboard provides sparkling highs and good depth. The neck has a modern 'C' profile, designed to offer superb comfort and smooth play. This Fender Player Strat is loaded with HSS configured Player Series pickups. The pickups consist of a New Player Series Humbucker and two Single-Coils, which produce classic Fender tones packed with plenty of punch. The Fender Player Stratocaster HSS Plus Top is also equipped with a 2-point Synchronised Tremolo, providing players with unique pitch bending effects and increased versatility. Finished in a classic Tobacco Burst with a black pickguard, the Fender Player Stratocaster is the perfect companion for guitarists who appreciate tone and style.

This Stratocaster is equipped with a range of high-quality components, delivering a profession grade performance to players on a budget. The set of Player Series pickups are in HSS configuration, with a New Player Series Humbucking and two Single-Coils. These pickups are infused with the soul of Fender, providing all the classic tones associated with many guitar legends. A toggle switch, tone controls, and volume control provides excellent tone shaping capabilities, allowing players to dial in the perfect tone for their playing style. The 2-point synchronised tremolo provides players with stunning pitch shifting effects, while the addition of a synthetic bone nut help enhance the natural resonance and string stability.

This Fender Player Stratocaster features a Modern 'C' shaped is designed for an incredibly comfortable playing experience, allowing the hand to fully cup the neck and deliver smooth navigation of the fingerboard. The maple neck provides beautifully bright tones, with searing highs and strong mids for a dynamic performance, whilst the pau ferro fingerboard offers a balanced tone with sparkling highs and good depth.

The Stratocaster has been one of the bedrock guitars for Fender. Countless legendary artists have gravitated towards Stratocasters and used them to create music that has defined generations. The player series captures all that history and brings it straight to your musical vison, to help crafted your sound.

Crafted to have of bit more edge, but with authentic Fender tone at their core the player series pickups are clear and focused.

The Plus Top Model comes with a flame maple top that adds a breathe of top end that really let you shine through in a mix, and to turn heads on stage

Write a review
Review Summary - 5 out of 5 based on 1 rating.
Sort reviews by:

Very pleased with this guitar and the back from Rimmers 1st class.