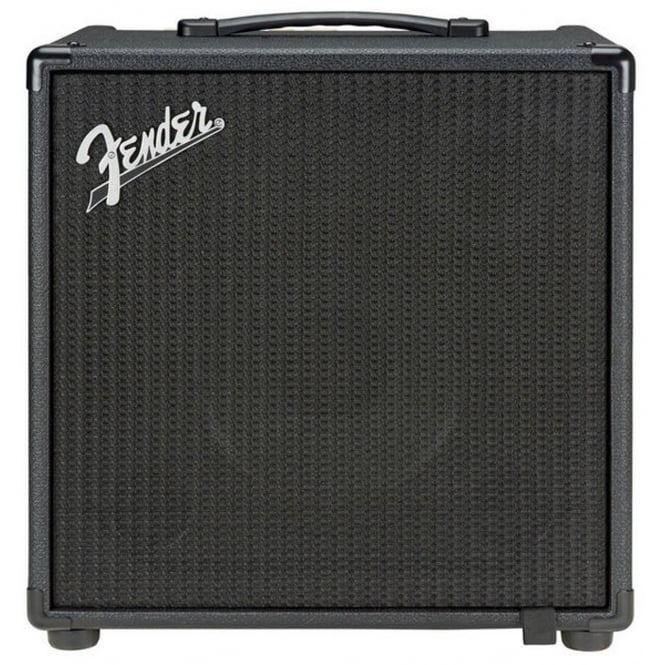 The Fender Rumble Studio 40 Bass Combo is a 40 watt bass guitar amplifier built for the practice room and the studio. It has a very compact design yet features a 10'' driver alongside a tweeter, switchable on/off for your ideal sound. The Rumble Studio 40 packs in the same modelling technology as found on Fender's popular Mustang GT series of amplifiers. This gives you access to dozens of amplifier and cabinet models based on Fender's back-catalogue of products throughout the decades. Here you should be able to find any sound you need. The amplifier also has a plethora of studio-quality effects on hand, including time-based effects, modulations, pitch effects and more. The Rumble Studio is equipped with Bluetooth to enable wireless music playback, along with a USB recording output for a no-fuss approach to studio recording. The amp has a WiFi connection, letting you access Fender's cloud to share tones. This is a very versatile amplifier with a plethora of tones and effects that should cover every sound you need for your practice and recording sessions.

Built For the Rehearsal Room and the Studio

The Fender Rumble Studio 40 is built for the practice room and the studio with its 40 watts of power driving a powerful 10'' driver. An additional high frequency horn is switchable on/off, letting you get your ideal treble response. A multitude of connections make it a great studio tool too, letting you connect directly with a vast array of modelled tones.

The Rumble's simple control layout disguises its wealth of tones accessible via the modern wonder of amplifier and cabinet modelling. Using the same technology as found in Fender's Mustang GT amplifiers, the Rumble packs in dozens of amp and cabinet models to recreate the sound of Fender's prized historic favourites; including the '50s Bassman, the huge stadium rigs of the '70s/'80s, and the best in modern day amplifiers. Between this selection, you should be able to find a wealth of tones for any genre.

The Rumble includes a versatile array of studio quality effects. This includes a range of compression and EQ effects, reverbs, delays, octave effects (with fast tracking) and a synth-like "Octobot", and more. A handy 60-second looper is an additional function to help with your practice and song-writing.

The Rumble combo packs in connections for many different eventualities. It includes WiFi to connect to the cloud and download or share your favourite tones. The amp also has Bluetooth which enables wireless music playback, alongside an AUX-in and headphone output for silent practice. The Rumble has an XLR output which enables live and studio direct signal connectivity. A USB output also enables a simple way to get a studio-quality recorded bass sound.

The Fender Rumble Studio 40 has the versatility to cover any tone, and can deliver enough volume for practice rooms and rehearsals or be connected silently making a great no-fuss recording setup. It has a rugged and portable deign that is light-weight enough to make transport simple. However you use your Rumble amp, you can be assured that you'll be working with Fender's latest technology making this a thoroughly modern setup.