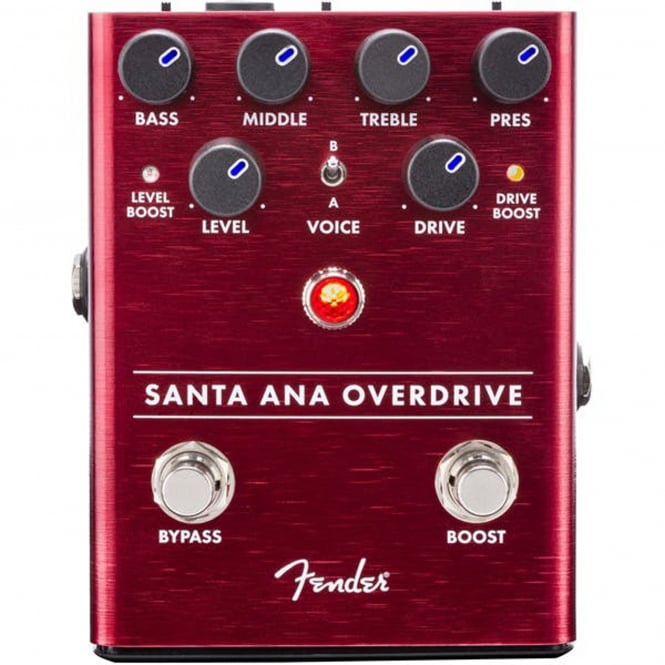 The Fender Santa Ana Overdrive pedal is a dynamic and nuanced overdrive effect that is perfect for generating the types of tones associated with the guitarist from which this pedal (most likely) gets its name - Santana.

The Santa Ana is designed to be an open sounding and dynamic pedal that can achieve a wide range of overdrive flavours, from edge-of-breakup tones through to thick, rich and sustaining lead sounds. It responds very well to your playing dynamics, and will clean up simply by rolling down the volume control on your guitar.

For blues and rock players who like an amp-like response, this pedal will give the balanced range of dynamics that you require, and help to bring out every nuance in your playing.

The Santa Ana pedal has a 3-band EQ and presence control to shape your sound. It also dual independent voices for different flavours of overdrive.

A boost switch is a handy addition to the Santa Ana that lets you set up your core tone with the pedal, and then engage the boost effect to push your sound even further into saturation. This effectively gives the Santa Ana two separate tones making it a very versatile pedal.

The Santa Ana has a rugged and lightweight aluminium chassis with a brushed metal finish. This gives it both read-ready durability and a classy-aesthetic that can take pride-of-place on your pedalboard. The pedal is built by Fender who have a multitude of experience in amplifier design and you can be sure that this pedal will last a lifetime of gigging, rehearsing and recording.

The jewel LED light not only looks great, it also adds a handy on-stage visual indicator of the pedal's operation. The pedal has a clever battery compartment door; it has a magnetic latch which means you can easily change the battery with no fiddly screws to worry about.

This is a thoroughly professional pedal - both in tone and appearance - and would make a welcome addition to your pedalboard.

Write a review
Review Summary - 4 out of 5 based on 1 rating.
Sort reviews by:

It provides subtle Fender guitar overdrive which what I was looking for. It says that it can be powered by a battery or transformer, neither included. The first unit I bought worked the first day with a battery but not the second day so I send it back and bought another from Rimmer which was a good price and delivered very quickly. I had the same problem with a new battery.
I found a transformer and it worked fine. It is a bit bizarre that they have a nice feature for loading the battery which doesn’t seem to be powerful enough. Apart from that it’s good!