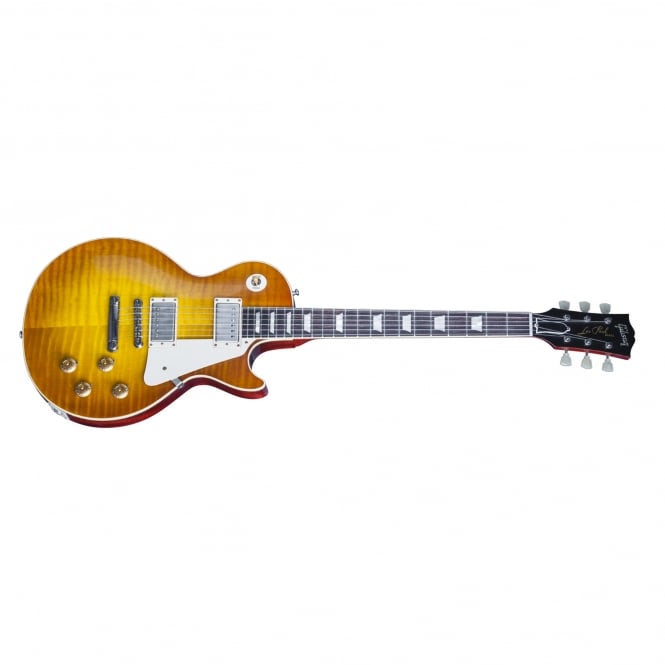 The Gibson Les Paul Standard of 1958 still remains one of the most widely sought after models in the world of guitars. Now the guys at Gibson Custom have brought it back with historically accurate appointments to give you a reincarnation that is as close to the original as possible. This was one of the first Gibson sunburst models which has since become legendary and this new version brings it right up to date.

The top is accompanied by mahogany in the back and sides which makes for the perfect partnership with the figured maple top to produce a strong, resonant output as authentic as those models which were first released in the late 50s. This version is given the 1950s style Les Paul body contour with no weight relief for a historically correct feel.

The Standard Historic 1958 Les Paul Standard is fitted with a single-piece mahogany neck with a comfortable 1950's style Les Paul profile. It is firmly joined to the body using hot hide-glue which was a constitutional element of the original guitars. The neck also has a historic long-tenon neck joint which enables the guitar to precisely convey its classic tone.

Aboard the neck is a solid, one-piece Indian rosewood fingerboard which assists the mahogany in providing an all-round Les Paul sound. With 22 frets at your service, you can work your way up and down the neck in confidence thanks to the cellulose Trapezoid inlays.

Gibson have employed Custom Bucker pickups in the electronics of the Standard Historic 1958 Les Paul Standard, and consider them to be their best replica of PAF pickups yet. The Custom Buckers achieve an output that is as close to the original sound of a '58 guitar as you can imagine. Each pickup is powered by Alnico III magnets which deliver you a mix of epic ringing or deep rumble depending on the sound output that you require.

To help you control the rhythm and lead pickups, the guitar is fitted with two Volume and two Tone pots with matched 500k potentiometers and encased with gold top hats.

The Standard Historic 1958 Les Paul Standard has an ABR bridge with thumbwheels partnered with a lightweight aluminium stop bar tailpiece which enhances the overall intonation and sustain. At the top end of the guitar at the headstock we have reissue Kluson deluxe green keys made with nickel plated steel to uphold tuning integrity with accuracy.

Protecting the beautiful, hand-sprayed nitrocellulose finish on the body is a 1950's style cream pickguard which also really complements the guitar. The guitar also comes equipped with a reissue Les Paul case with a brown outer and pink fur lining to further protect this wonderful guitar.