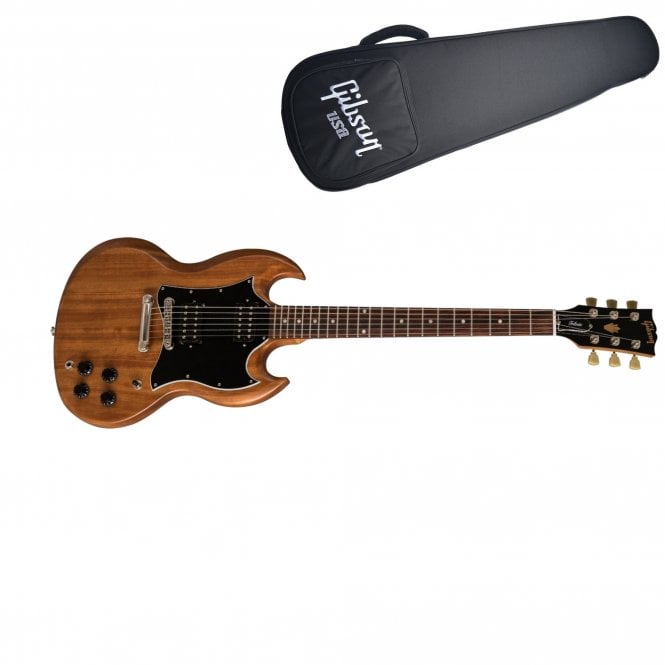 The Gibson SG Standard Tribute is available in 2 beautiful finishes, the Vintage Cherry Satin and the Natural Walnut. We have both of these guitars here at Rimmers Music Bolton. The guitar has a lovely rounded profile maple neck with a rosewood fingerboard. The guitar comes loaded with 490R and 490T pickups for that true Gibson tone.

The guitar comes with a Gibson Deluxe Padded Gig Bag as well. If you’re thinking about an SG style guitar and haven’t tried the Tribute it is a most, I’m sure you’ll be impressed.

Get ready to rock. The Gibson SG Standard Tribute 2019, Walnut Vintage Gloss is a perfectly engineered machine for all types of rock music. Unleash electrifying energy into your music with an amazing, full-bodied voice courtesy of open coil 490R and 490T pickups. Guitar solos sound sensational with the SG's snarling tones, and are easy to play thanks to a rounded maple neck that makes playing fast note sequences simple.

The original SG has been a staple of all varieties of rock music since its birth in the mid-60s. Jimi Hendrix used one when he wanted to get bluesy. Pete Townshend wielded an SG as he helped The Who develop their status as "The Loudest Band in the World". AC/DC's Angus Young wrote some of the most enduring riffs in rock on an SG. Even The Beatles used one on their way to becoming the biggest band of all-time, with George Harrison playing one on Revolver and Rubber Soul, and John Lennon borrowing the same instrument for The White Album.

There's a reason it's so popular. The Gibson SG has amazing rock pedigree surging through every one of its strings.

The SG has a truly exhilarating sound. Open, razor sharp tones are delivered by open coil 490R and 490T pickups. Open coil humbuckers are known for producing a much greater crispness in sound than their covered counterparts. You're able to explore an astonishing range of tones while maintaining power thanks to these, and excellent projection ensures your lead lines will always cut through the mix.

Being able to hit notes quickly is integral in rock music. Whether you're tearing down barriers with blistering solos, or providing the heartbeat of a song with fast-moving chord progressions, a swift tempo is important. The SG is tremendous for this. A marvellously rapid-playing, slim maple neck lets you tear up and down the fretboard with the pace of an Olympic sprinter. An extremely smooth satin finish gives your playing unmatched fluidity. Rock music doesn't compromise. Nor should your playing speed.

When you're playing at such a high tempo, the last thing you need is discomfort holding you back and preventing you from hitting your notes. Again, the SG lives up to its reputation as the ultimate rock instrument by ensuring you're comfortable enough to unleash hell on your guitar. A superbly sleek rosewood fingerboard makes movement across the frets painless, eliminating cramp and soreness. The SG Standard Tribute never holds you back.

No one wants needless scratches on their instrument. The SG's gorgeous finish is protected by a highly durable 5-ply Gibson pickguard, to ensure your guitar stays pristine. This allows you to rock away with as much energy, force, and power as you wish without the worry of damaging your guitar. You can windmill like The Who's Pete Townshend to your heart's content. Perfect for an instrument designed with the rock sound in mind.

Stay pitch perfect at all times

Eliminate tuning problems with the SG Standard Tribute. Having to fiddle around with tuning pegs between every song to stay in tune is a guitarist's worst nightmare. You'll never have this problem thanks to the SG's graphite TekToid nut. This high-tech development prevents undesirable friction that can cause strings to jump out of tune and even break, meaning the hassle of changing strings is cut to a minimum. Furthermore, the nut's tightness enhances the guitar's tone and sustain, making sure every note you play is audible and crystal clear.

The Gibson SG is everywhere in rock. A varied genre requires an equally varied guitar, and a glance at the many different artists who have at some point brandished an SG tells us that the instrument has remarkable versatility. First released in 1961, SG stands for 'solid guitar'. It carried a power and potential for rock music previously unseen in the music industry, and was marketed as having "the fastest neck in the world". These are characteristics that Gibson have exactly emulated in the 2019 Tribute model. Such features became instantly popular across rock. A seemingly endless list of famous SG players includes Frank Zappa, Jimi Hendrix, George Harrison and Jerry Garcia. Angus Young crafted AC/DC's riff-heavy sound using one. Tony Iommi gave birth to the metal genre with Black Sabbath with an SG. Thom Yorke played one as he and Radiohead entered the 21st century as one of the most consistent bands ever. Calling rock guitarists of all shapes, sizes and genres: you need an SG in your collection!