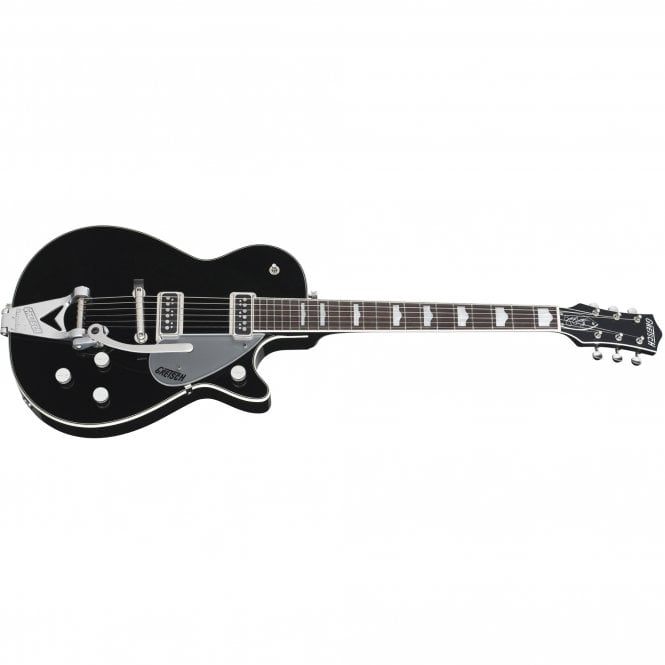 George Harrison’s signature Gretsch is designed with mid-50s style sound chambers, creating a semi-hollowed design, perfect for making the guitar lightweight, and boosting its resonance. The chambering effects the resonance frequencies of the guitar, producing some overtones while enhancing the overall resonance of the guitar to deliver bright tones. Its full-bodied, rounded sound is thanks to the maple and mahogany combination, with the maple top offering plenty of sparkle and the mahogany body providing excellent warmth.

The guitars mahogany neck offers a comfortably smooth play, creating warm, mellow tones with good presence in the lower mids. The 21-fret rosewood fingerboard featured on the Gretsch is naturally oily and works well for any surface that sees frequent human contact. The stray overtones are absorbed into the oily pours, making the sound richer than that of a maple fingerboard. The mahogany and rosewood combination provides the guitar with complex highs, thick creamy lows, and a very appealing midrange.

The Duo Jet guitar features a set of Gretsch’s DynaSonic pickups, which have been built to the original specs of the DynaSonic single coil pickups from the late 50s, deliver the same tones the George Harrison played in The Beatles. Featuring individually adjustable pole pieces and alnico 5 magnets, the pickups offer excellent resonance, and when used together provide rockabilly sounds, old school rhythms, and blues licks. The bridge pickup offers a crisp, classic rock twang, while the neck delivers jazzy chords.

The Bigsby vibrato tailpiece offers a smooth tremolo system to create classic sounding pitch bend, providing evenly spread movement across all strings. The Bigsby can be used to create subtle movements in chords, adding extra depth and texture to your sound. The vibrato is designed with a black Philips head screw to hold in the tremolo arm, mimicking the same feature on George Harrison’s actual guitar. The bridge if a “rocking’ bar design with a pinned ebony base, adding plenty of sustain to your tone for a classic 60’s sound, filled with dynamic sensitivity. With a classic design, the “rocking” bar bridge and Bigsby tailpiece not only enhances your playing experience, but also adds a visual aspect to the guitar that’s reminiscent of the 60’s.

With a design that’s thrown back to the golden days of The Beatles, the signature guitar features perfect hardware to give it a classic look. Its stylish control knobs are Gretsch’s G-shield’s, a design that was used on many of the old Gretsch guitars, and offers knurled edges for an easy grip, letting you quickly dial in any changes to your tone. The Grover Sta-Tite tuners provide a vintage look while delivering quick and easy tuning, as well as incredible string stability. The silver plexi pickguard adds to the guitars look, and the bone nut helps enhance the strings resonance.

George Harrison was born in Liverpool on the 25th February 1943, and went on to become the leading guitars of the legendary band the Beatles. An English singer, songwriter, music and film producer, George Harrison got his first guitar in 1956 and went on to form a skiffle group called the Rebels. In 1958, Harrison auditioned for another skiffle band called the Quarrymen, which later become known as one of the most influential bands, the Beatles. During his time in the Beatles, Harrison composed many famous songs such as “Here Comes the Sun” and “Something” which later become the Beatles second most covered song. During his time in the Beatles, Harrison began fusing a range of playing techniques and sounds, creating a unique and innovative playing style and sound that would go on to influence many guitarists.