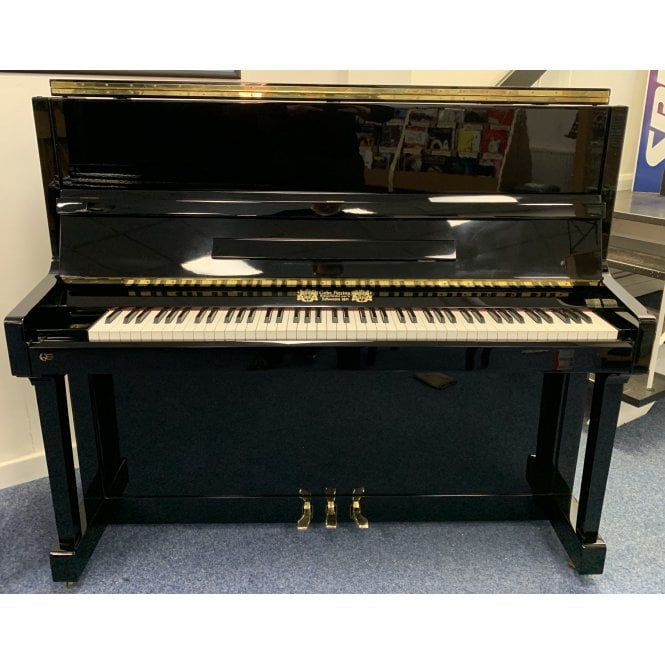 Perzina GP-129 Upright Piano | Polished Ebony | Used | Bolton Store
This is a Perzina GP-129 Upright Acoustic Piano finished in Ebony Polyester which has a full size 88-note keyboard, 3-pedals and a responsive touch action. All Perzina Upright Pianos have a patented floating Soundboard-Plate design and the unique Concave reverse-crown soundboard. These technical features allow the soundboard to vibrate freer and project the sound to the performer. This means that Perzina Upright Pianos play and sound like most smaller Grand Pianos. Each Perzina Piano has individual weight-calibrated keys which are balanced by hand for each individual piano. The keys are also crossed grained with Spruce & Walnut woods to keep them stable for use in any climate, altitude or region. The 3 pedals are Sustain to give resonance to the strings when playing, a Half Blow pedal which shortens the travel of the hammers and produces a more mellow tone and a Celeste Pedal which introduces a Celeste Rail and felt between the hammers and the strings to produce a very quieter muffled sound for silent practice.
For the age of this piano it is in excellent condition both inside and out with only minor polish scratches to the case which are hardly noticable.
Due to the fact that this piano is a larger Upright it produces a very bold, deep and resonant sound with very good string decay.
James - Rimmers Music Bolton.

History Of Perzina...
Since 1871, Perzina have been manufacturing pianos. During the late 19th Century and the late 20th Century the Perzina piano factory was the largest in Northern Germany. After Germany was reunited in the early 1990's the Perzina factory in Lenzen, Germany, was sold to a European Business Man and Piano Expert Ronald Bol. He still owns the facility in Lenzen and a large percentage of the new Yantai-Perzina factory in Yantai China.