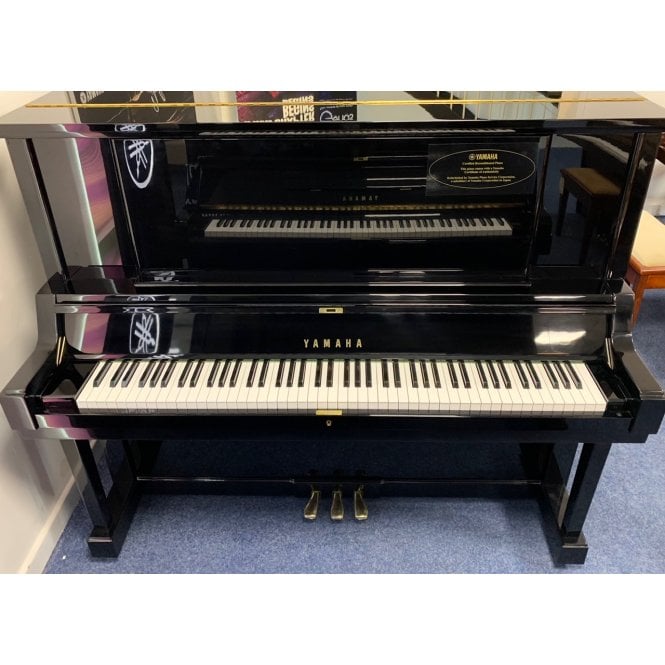 At Rimmers Music we are very proud to present for sale this beautiful Refurbished by Yamaha YUA Upright Piano in the finish of Polished Ebony. This piano is an advanced version of the Yamaha U3 Upright Piano. The YUA has a slightly different cabinet design than the regular U3, making it more aesthetically pleasing. The music desk on the YUA has a great feature as well, if you pull the music desk towards you it releases more sound/volume from the front of the piano. This happens due to three circular holes cut into the wood and covered with speaker cloth.
Yamaha have a great feature with the action as well, the hammers have a metal spring bar rather than fabric. This helps the hammer bounce back to the starting position quicker , making for a faster playing key action.
The X Bracing on the back of the piano is a another great feature of the YUA, it gives the piano a slightly richer tone.
This model was made in the Yamaha Nippon Gakki factory in the year 1978. This piano is a very sought-after model and one not to be missed. If you are looking for a piano that has a lovely tone and a great playing action, this is the piano for you.
James - Rimmers Music.

Pedals: 3 Pedals - Far Right is Sustain, the middle pedal is a Sostenuto (like you would find on a grand piano), the left pedal is the Una Corda pedal. The piano also has a lever on the left hand side to operate the celeste rail.