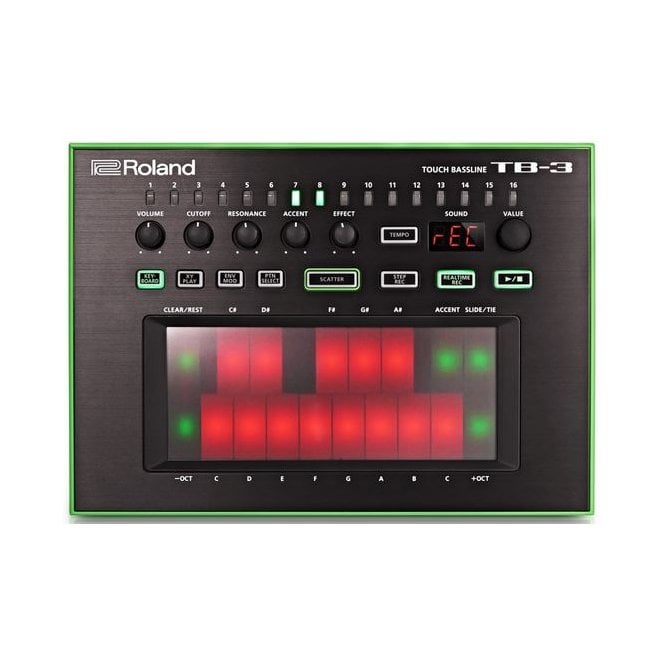 The TB-303 has evolved into the Roland AIRA TB-3, engineered for today's players but keeping in mind its lineage as one of the staples of electronic music.

Since the '80s, the TB-303 has been a prime element in the creation of groundbreaking electronic dance tracks. Cherished so much by inventive musicians, it's not only been used to write hits, but had a song written about it!

The AIRA TB-3 emulates the individual circuit behaviour that has made the TB-303 an indispensible bass synth. Crafted using the original specification sheets, with fully reproduced saw-tooth and square-wave oscillators, as well as the -18dB/octave ladder low pass filter used in the original, the TB-3 captures the unmistakable cutoff and resonance. Every aspect of the TB-303 sound is there.

The unique Roland TB Bass Line not only sounds unique, it has an unmistakable feel too. The Accent, Slide and Step Sequencer behave just like they did on the original TB-303. But the TB-3 is not a copy. Engineers have worked on evolving the TB-3 so it's fit for today's players and futureproofed with a pressure sensitive Touch Pad and dedicated Tempo control with Shuffle and Tap Tempo.

Brightly lit in green and red, the TB-3's Touch Pad lets you seamlessly create patterns and interact with the unit during performance. Tweak pitch, volume, filters and control modulation just by pressing on the pad. Finger gestures control transpose, switch and chain patterns, and the Touch Pad is partitioned with keyboard spaces making it natural and intuitive to play.

Designed to play seamlessly with the other products in the Roland AIRA series, the TB-3 can sync with each of them as well as other external devices. The TB-3 can also send and receive Audio and MIDI data using a USB connection to your computer.