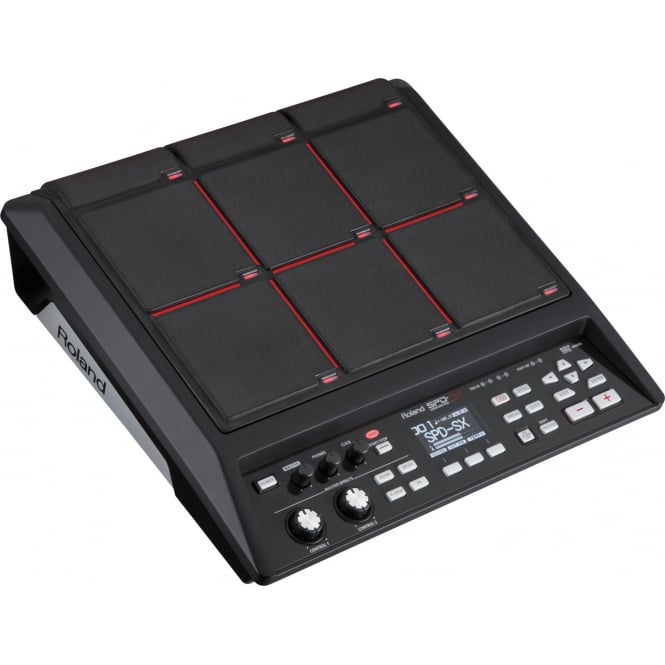 The SPD-SX Sampling Pad puts powerful sample creation andplayback under your sticks with innovative audio-capturing features, expressiveplayability, three multi-effects engines, and much more. The perfect additionto any acoustic or electronic drum kit, percussion setup, DJ booth, or keyboardrig, the SPD-SX is equally at home on the live stage, in the recording studio,pre-production suite, or dance club. The SPD-SX takes many of the provenconcepts from its predecessor and raises them to a new level. Whether you`refiring off one-shot samples, looped phrases, or complete audio playback tracks,the SPD-SX is loaded with the latest technology and tools to get the job donewith speed, precision, and convenience. Enjoy the most advanced triggering andsampling technology in a sleek, easy-to-use percussion instrument.

The SPD-SX is equipped with nine highly sensitive rubber pads with twoindependent real-time control knobs and four dedicated effect buttons. Roland`smost advanced triggering technology ensures the ultimate in accuracy and fullydynamic performance, while a large backlit LCD provides easy-to-read data inall varieties of environments. Each pad has a companion LED that illuminates toshow the pad`s status. When you trigger sample phrases, the LEDs remain lit toshow you which pads are in play and which are not. In addition, the LEDs changeillumination strength according to audio-level activity (similar to levelmeters on a mixing board). The high-contrast red divider lines help you see thepad zones clearly onstage.

Today, increasing numbers of drummers and percussionists need to incorporateaudio samples into their performance. The SPD-SX will satisfy their increasingrequirements with essential features such as individual click output routing,dedicated volume controls, Pad Check function, individual Sub Out, and more.

The SPD-SX has three multi-effects units onboard: one master unit and two unitsthat are assignable per kit. The master effects engine lets you perform in realtime like a DJ using the dedicated front-panel controls. Get your hands on the filter,delay, short looper, and user-assignable effect - all of which can becreatively adjusted with the four front-panel buttons and two control knobs.

There`s much more to the SPD-SX than meets the eye. A powerful-yet-friendlylineup of features has been built into this little powerhouse, such asMulti-Pad Sampling. While audio streams in from an external audio player orcomputer (via Audio In or USB), simply strike each pad at the appropriatestart/end points, and the sample will be automatically truncated and assignedto that pad. It`s a fast, friendly way to create multi-sampled phrases and padmaps.