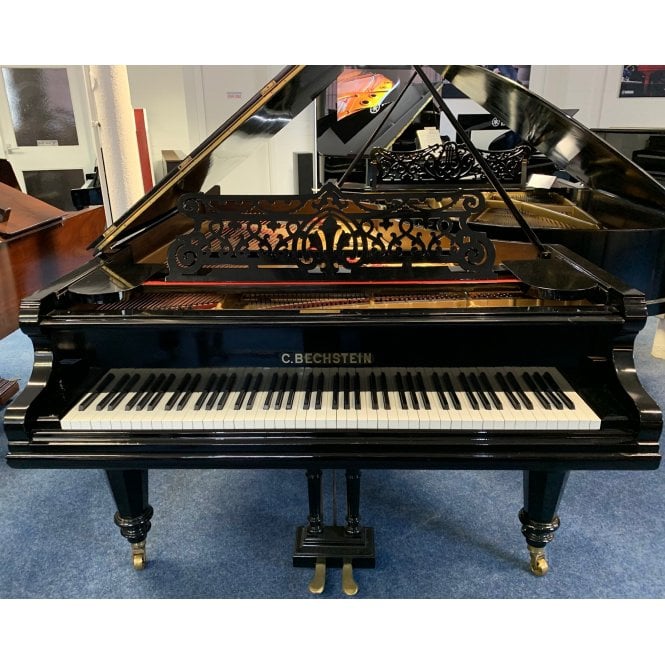 Used Bechstein Model V Grand Piano | Polished Ebony | Serial No. 19089 | Bolton Store
At Rimmers Music we are very proud to present for sale this lovely antique Bechstein Model V Grand Piano in the finish of Polished Ebony. We have dated this Bechstein Model V to have been Made in circa 1887. This Bechstein Model V has a fish tail cabinet design with turned columned lyre and turned octaganol legs. The piano in its life has had a re-string and the soundboard has been re-varnished. The piano has also had new damper felts and hamer heads. The cabinet shows signs of wear and has marks in places, on the front of the key fall their has been a repair to the left hand side. We have to say for the age of this piano it is a lovely piano and has a beautiful tone. The key tops have been replaced and the action is light to play. The turn buckle is also missing on this piano. We are including free delivery to anywhere in UK mainland (to a ground floor easy access location). This is a piano not to be missed, as we don't see them very often at all in this condition.
James - Rimmers Music Bolton.

About Bechstein Pianos.....
It was the developing technology of the industrial revolution that bought Bechstein into prominence in the nineteen century, and it was not to be succeeded by Steinway until the beginning of the Second World War.

In 1853 the first C. Bechstein was built in Berlin by Carl Bechstein. A man of innovative ideas, he wanted to create a piano that was designed for both energetic and vigorous playing as well as subtle and delicate.

Later to become the Berlin Philharmonic’s first conductor, Hans von Bulow became a keen supporter of the Bechstein piano after performing on a C. Bechstein concert grand in 1857.

A new Bechstein branch opened in London in 1885 and the desire for the magnificent instrument was demonstrated when a Bechstein grand piano was supplied to Queen Victoria. Furthermore, in 1892 the opening of the Bechstein Concert Hall in Berlin was celebrated with a music festival that featured Johannes Brahms and Anton Rubenstein, setting C. Bechstein’s standard for the highest piano-making art.

In 1901 the Bechstein Hall opened in Wigmore Street, London, and would later become “Wigmore Hall’ due to its expropriation in the Second World War.
Piano Restorations
Piano restoration team
Why Jeff Shackell? Piano Advice

Bechstein became a joint-stock company in 1923. They participated in the Barcelona World Exhibition, although only a small amount of customers were able to afford the instruments due to high customs duties.

However, C. Bechstein was still maintaining its innovative ideas and striving to broaden the techniques of piano making in 1930. It produced the advanced Neo-Bechstein- the world’s first electric piano, together with the Nobel Prize laureate Walther Nernst and Siemens.

From 1932 the Great Depression had a profound effect on the company, with a decrease in production and a drop in prices. This caused many disagreements among Carl Bechstein’s heirs, and Bechstein suffered significantly. In addition to this, the emigration of the Jews during the Holocaust meant that it lost a considerable amount of customers at this time; Bechstein being a highly favourable instrument among the sophisticated tastes of the Jews.

In 1945 the production facilities of Bechstein were destroyed by the bombardment of British and American forces during the Second World War, and thus the company moved to the American sector. Bechstein was then confiscated by the US administration.

In 1953 Bechstein’s centennial was celebrated by the Berlin Philharmonic under William Backhaus and William Furtwangler. Following this, Bechstein saw committed customers such as Leonard Bernstein, Jorge Bolet, Sergiu Celibidache and Wilhelm Kempff.

When the Berlin Wall was constructed in the 1960s Bechstein produced only 1,000 instruments annually due to the decline in Berlin’s population.

The 125th anniversary of Bechstein was celebrated in 1978, with appearances from Alfons and Aloys Kontarsky, Shura Cherkassky and Christian Zacharias.

Over the course of 1986 C. Bechstein opened new production facilities in Berlin-Kreuberg as well as taking control of two previously Berlin-based companies, Euterpe and W. Hoffmann.

Bechstein went public in 1996, which paved the way forward in relation to the increasing globalisation of markets. In 1999 the first C. Bechstein Centre opened in Berlin.

In 2003 Bechstein formed a partnership in co-operation with the Korean musical instrument manufacturer Samick. In order for C. Bechstein to meet global market demands, Samick took control of the marketing for the company in key overseas markets.

In 2005 ‘Berlin Bechstein Piano Co. Ltd.’ was founded by C. Bechstein and Samick in Shanghai, China, manufacturing instruments that were exclusively affordable to the Chinese market.