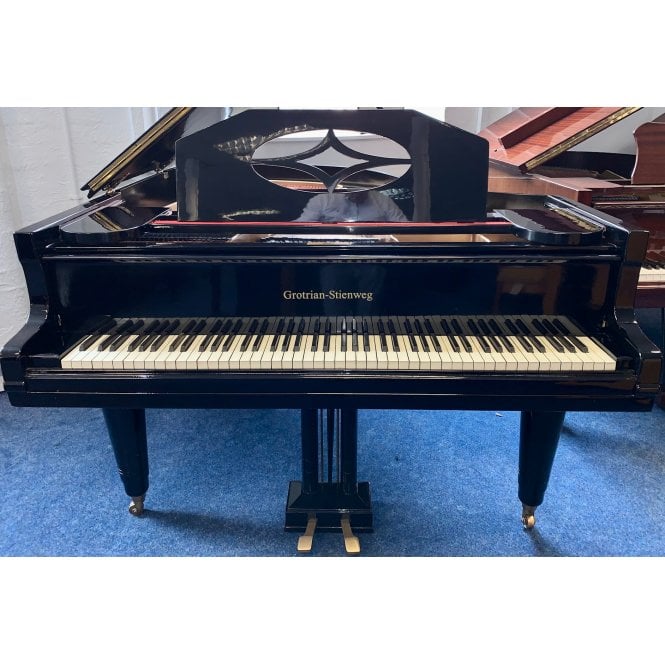 At Rimmers Music we are very proud to present for sale this beautiful Grotrian-Steinweg 160 Grand Piano in the finish of Ebony. We have dated this piano to be from cira 1920 and in it's lifetime has had a re-spray of the cabinet and a regilding of the cast iron frame. The piano for its age is in fair condition and sounds lovely. The action plays light and is responsive. As you can see from the pictures the cabinet has some signs of age but these are purely cosmetic. This is a very special piano and one not be missed. This piano is a lovely baby grand piano size but really packs a punch. We are including free delivery and Home installation to a ground floor easy access location, anywhere in UK mainland.
James - Rimmers Music Bolton.

Grotrian-Steinweg, known as Grotrian in the US, is a German manufacturer of prestige pianos. The company is based in Braunschweig, Germany, commonly known as Brunswick in English. Grotrian-Steinweg makes premium grand pianos and upright pianos.

Grotrian-Steinweg's history dates back to 1835 when the first Steinweg piano factory was built by Heinrich Engelhard Steinweg (later known as Henry Steinway after his emigration to the US where he founded Steinway & Sons). In 1856, Friedrich Grotrian became a partner; in 1865 his son Wilhelm Grotrian and two associates bought the factory and the right to market their pianos as successors to the Steinweg brand. Ensuing generations of Grotrian family members led the company to become one of the finest piano manufacturers in Germany. Grotrian-Steinweg pianos were preferred by some famous pianists, and they received accolades at the World's Columbian Exposition in Chicago. Grotrian-Steinweg operated an orchestra and a concert hall, and established sales rooms in a half dozen major cities in Germany, and by 1920, in London as well. At its peak in the late 1920s, Grotrian-Steinweg employed 1,000 people and made 3,000 pianos per year.

Economic depression in the 1930s and war in the 1940s caused Grotrian-Steinweg to decline severely and then lose its factory completely. The family rebuilt the factory and re-established its reputation for quality work. In the 1950s, an annual piano-playing competition was founded by the company, to identify promising young piano students.

Grotrian-Steinweg sought to expand into the US in the mid-1960s. Steinway & Sons sued to prevent them from using the Steinweg name, resulting in a 1975 decision by the United States Court of Appeals for the Second Circuit. The case set a precedent in describing "initial interest confusion": that the brand Grotrian-Steinweg could cause piano buyers to temporarily confuse its brand with the brand Steinway & Sons. The court ordered Grotrian-Steinweg to stop selling pianos in the US under the "Steinweg" name. Afterward, the company formed a business entity named Grotrian Piano Company to sell pianos in North America.

On 13 January 1803, Georg Friedrich Karl Grotrian, called Friedrich, was born in Schöningen, Germany. He settled in Moscow to sell pianos, beginning around 1830. He joined a partnership in a small piano making firm based in Saint Petersburg, and included these pianos among the various instruments he sold in his successful Moscow music shop.

In Germany, Heinrich Engelhard Steinweg (1797–1871) started making pianos in 1835 from his house in Seesen at the edge of the Harz mountains; a source of fine beech and spruce wood for the instruments. Among the pianos that Steinweg produced in his first year was a square piano designed by and built for Friedrick Grotrian. (This instrument is now in the Braunschweig museum. H.E. Steinweg entered three of his pianos in a state fair in 1839, two of them square pianos, but his grand piano brought wide notice. In 1850, H.E. Steinweg took most of his large family to New York City, leaving the piano factory to his eldest son C.F. Theodor Steinweg (1825–1889) who stayed behind to run it under his own name. Meanwhile, in New York City, the Steinweg family Americanized their surname to Steinway and in 1853 they founded the piano manufacturer Steinway & Sons.

Soon after taking ownership of his father's old factory, C.F. Theodor Steinweg moved it to Wolfenbüttel near Braunschweig. Here he met Friedrich Grotrian who was traveling for business. In 1854, Friedrich Grotrian received the Müller-Mühlenbein pharmacy as an inheritance from an uncle, so he moved back to Germany to manage it. He joined C.F. Theodor Steinweg's piano company as a partner in 1856.

In 1857, C.F. Theodor Steinweg and Grotrian moved the piano factory to Braunschweig, setting up shop in a former mayor's mansion at 48 Bohlweg Street in the inner, medieval part of the city. The company employed about 25 people at this time. Friedrich Grotrian died on 11 December 1860, leaving his share of the company to his son Wilhelm (1843–1917). In 1865, C.F. Theodor Steinweg was needed by his family in New York to help manage Steinway & Sons after his brothers Henry and Charles died. Wilhelm Grotrian joined with two of the piano workmen—Adolph Helfferich and H.D.W. Schulz—to buy out C.F. Theodor Steinweg's share of the building. The new partnership paid for the right to use the trademark "C.F. Th. Steinweg Nachf.", meaning, "Successor to C.F. Theodor Steinweg." (Nachf. is an abbreviation for Nachfolger—German for successor.) The company name became "Grotrian, Helfferich, Schulz, Th. Steinweg Nachf." Wilhelm Grotrian raised two sons in the 1870s: Wilhelm "Willi" Grotrian Jr (1868–1931) and Kurt Grotrian (1870–1929).

In New York City, C.F. Theodor Steinweg (H.E. Steinweg's son) changed his name to C.F. Theodore Steinway, and served as the leader and chief technician of Steinway & Sons for fifteen years. He did not like living in the US, so he kept his home in Braunschweig and traveled back and forth as needed. In 1880 he stopped traveling overseas and started a new Steinway & Sons piano factory in Hamburg, competing with his father's old firm, now called Grotrian-Steinweg, in making pianos for European customers. After establishing the business, Steinway retired to Braunschweig for his last years. He died in 1889, leaving his collection of pianos to the city's museum. The Hamburg factory proved successful in competing against Grotrian-Steinweg—both companies were known for producing premium pianos.

In the 1880s, Willi Grotrian studied piano making with Wm. Knabe & Co. in Baltimore, Maryland, and with Pleyel, Wolff et Cie in Paris, France. Kurt Grotrian also studied with piano makers in other countries. Their father Wilhelm Grotrian Sr took Willi with him to Chicago in 1893; there, at the World's Columbian Exposition, Grotrian-Steinweg won an award for fine quality. Pianists Eugen d'Albert, Ignacy Jan Paderewski and Clara Schumann expressed a preference for Grotrian-Steinweg pianos. Grotrian-Steinweg was counted among the top German piano manufacturers along with Bechstein, Blüthner, Feurich, Ibach, Lipp and the Hamburg division of Steinway. In 1895, Wilhelm Grotrian Sr made his two sons partners in the business. He told them, "Lads, build good pianos and the rest will take care of itself."Willi Grotrian methodically set about to improve the systems and standards the Grotrian-Steinweg company used to produce pianos. The Grotrian-Steinweg brand was well known for being of the highest quality: the company was named purveyor to some 30 "Kaisers, Kings and royal houses". The owners Franz Wilhelm Grotrian, Willi Grotrian and Kurt Grotrian were awarded an imperial and royal warrant of appointment to the court of Austria-Hungary.

In Braunschweig, Grotrian-Steinweg grew to a workforce of 550 by 1913, producing about 1,600 pianos annually. The Grotrian-Steinweg Orchestra was active in Leipzig under the baton of young conductor Hermann Scherchen. Grotrian-dedicated salesrooms were operating in Leipzig, Hanover, Königsberg, Düsseldorf and Berlin.

During World War I, Kurt Grotrian left the factory to serve in the German Army. He was soon wounded and taken prisoner of war. The elder Wilhelm Grotrian died in 1917. Willi Grotrian, his son, led the company but it was greatly reduced in manpower and orders for pianos. After the war, the company resumed as before, expanding sales in 1920 by establishing a London shop under the brand name Grotrian-Steinweg. The workforce increased to 1,000. In 1924, Grotrian-Steinweg built an unusual piano for microtonal music composer Ivan Wyschnegradsky. The piano had three manuals, and strings tuned a quarter tone apart. By 1927, Grotrian-Steinweg was making about 3,000 pianos annually. This number dropped significantly in the 1930s during the Great Depression; fewer than 500 pianos were made in 1931, and the workforce was reduced to less than 200.

In World War II, the Grotrian-Steinweg factory (like many others in Germany) was ordered to switch to fabricating parts for aircraft. The factory was destroyed in 1944 by the bombing of Braunschweig, as was the founder's mansion in the center of town. Afterward, Erwin and Helmut rebuilt the factory. By 1948, production had resumed; composer and pianist Wilhelm Kempff went on record as an admirer of the "sonority and exquisite execution" of the post-war work.