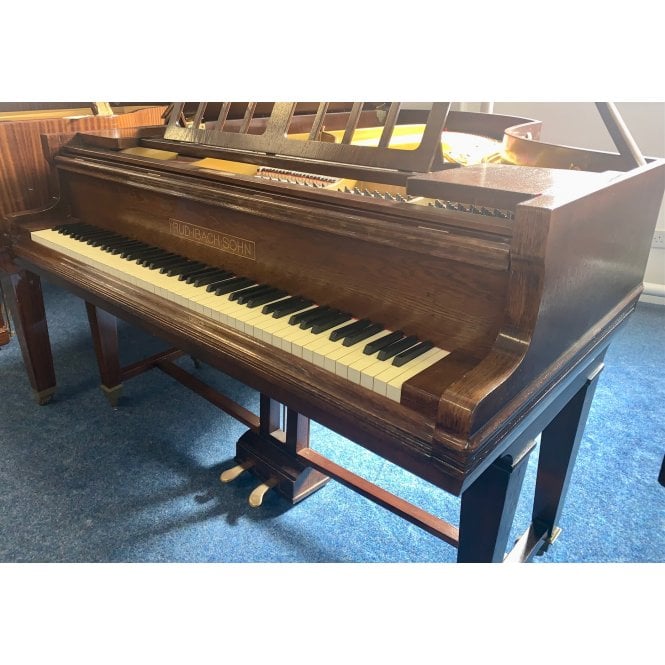 At Rimmers Music we are very proud to preset for sale this beautiful RUD.IBACH.SOHN Grand Piano in the lovely finish of Oak. This piano was made in Germany circa 1908-1909 at the IBACH factory in Barmen, Rhineland. For its age this piano plays and sounds amazing. The cabinet has signs of age and a few scratches here and there but certainly nothing sinister is wrong with this piano, the cabinet markings are purely cosmetic. This piano would be perfect for any level of player and is a joy to play, with a player friendly light key action. We are including free delivery and Home installation to anywhere in UK mainland with this purchase. The piano will be tuned and prepared by our very own piano tuner/technician. Part exchange welcome!
James - Rimmers Music Bolton.

In 1794, Johann Adolph Ibach sets up his shop to build organs and pianos. By this time old Johann Seb. Bach has been dead for nearly half a century, Haydn has completed most of his oeuvre and Beethoven is working on his Opus 1 Piano Trios. The time is ripe for radical changes in society, science and the arts. On the horizon, a new era in musical instruments dawns: The piano replaces the harpsichord as the instrument of choice. Mr. Ibach builds his pianos based on a genuine artisan approach to their construction for local customers.
Johann Adolph Ibach 1766 -1848

The Third Generation:
Peter Adolph Rudolph Ibach 1843 - 1892
IBACH becomes a household name for the Avant-garde of piano builders. A sensational innovation is to have leading artists of their time design design cabinet cases for pianos, ushering in the decorative element to piano manufacturing in true fashion of its time. IBACH also pursues a tradition of establishing friendships with leading contemporary composers: Richard Wagner, Franz Liszt, Johannes Brahms and many, many more..

The Fourth Generation:
Albert Rudolf Ibach 1873 - 1940
Around the turn of the century, the House of IBACH experiences an incredible boom. Factories in Barmen, Schwelm and Berlin, retail shops and concert halls in Cologne, Dusseldorf and Berlin. IBACH sponsors annual piano competitions, heralding prize-winners such as Claudio Arrau, Elly Ney and many other leading pianists. The chain of artist-friendships continues with Max Reger, Richard Strauss, Arnold Schunberg, Anton Webern, Bela Bartuk and other great musicians, as well as relationships with contemporary master builders such as Peter Behrens, Bruno Paul, and Muthesius. World War I and The Great Depression shatter the piano industry. IBACH, however, manages to survive the crisis, pick up the pieces and begin again.

The Fifth Generation:
The development of a three foot upright piano with a sensational tone quality and exemplary design sets new industry standards. IBACH achieves worldwide recongnition and continues its expansion. A great future appears on the horizon; World War II destroys all hopes as factories, retail houses and concert halls, the IBACH Hall in Dusseldorf, the archive and an incredible wealth of art are completely destroyed. At the end of this war, Ibach lies in shambles. Another beginning takes place in the factory in Schwelm. With a novel program of upright and grand pianos, IBACH regains international reputation. A network of exclusive dealers bridges the gap between IBACH and music lovers all over the world.
Johann Adolf Ibach 1911-1999 in memoriam

The Sixth Generation:
Today the company is run by Rolf Ibach. He has been trained with the world's best piano builders. His continuing collaboration with the leading experts and concert artists continues to set industry standards and remain, as Riachard Wagner wrote more than a century ago to his friend Rudolf Ibach, "tonal helpers" to music lovers all over the world. Therefore, IBACH represents a unique tradition--six generations of piano builders, six eras of piano making. This is why IBACH has steadfastedly retained its position in the music world throughout history.