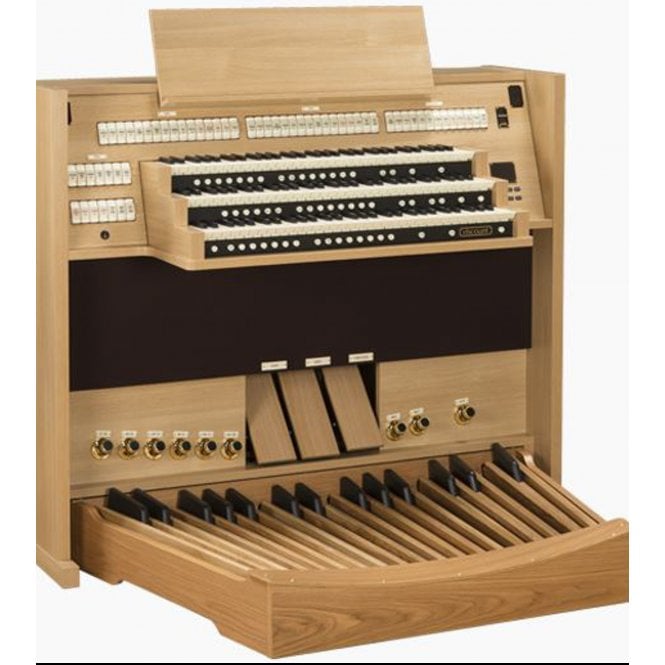 The SONUS 50Dlx  is a two manual organ with a 32 note pedalboard and  38 register-tabs, each of which can select hundreds of organ and orchestra voices.

The SONUS  50Dlx  comes with  8 organ styles (4 preset  and 4 programmable) that allow the organist to create and store an infinite number of combinations, either in the 128 internal memory locations or externally via USB memory. The parameter settings are easily accessible through the graphic display on the front panel. The “Tracker Action” style keyboard accurately detects touch by obtaining the speed of actuation of the keys, making it possible to feel a "Tracker Touch" effect, i.e .the correlation between the "touch" of the organist and the transient attack of each virtual pipe.

Developed with the award-winning and patented Physis® physical modeling technology, which reproduces the physical phenomena involved in the sound generation of the pipe organ, the Sonus 50Dlx is capable of generating the highest-fidelity, most authentic church organ sound.

The SONUS  60  is a three -manual organ with a 32 note pedalboard and  55 register-tabs, each of which can select hundreds of organ and orchestra voices.

Available in both wood and laminate console finishes, the SONUS  60  comes with  8 organ styles (4 preset  and 4 programmable) that allow the organist to create and store an infinite number of combinations, either in the 128 internal memory locations or externally via USB memory. The parameter settings are easily accessible through the graphic display on the front panel. The “Tracker Action” style keyboard accurately detects touch by obtaining the speed of actuation of the keys, making it possible to feel a "Tracker Touch" effect, i.e .the correlation between the "touch" of the organist and the transient attack of each virtual pipe.

Developed with the award-winning and patented Physis® physical modeling technology, which reproduces the physical phenomena involved in the sound generation of the pipe organ, the Sonus 60 is capable of generating the highest-fidelity, most authentic church organ sound.

Parameter settings are easy to access, modify and store through the graphic display on the front panel.

The SONUS 60 uses a revolutionary new sound system developed by Viscount called RAR (Real Audio Rendering). It is able to simulate multiple sound reflections of the walls, projecting the organist at center stage and involving them in an unforgettable sound experience – even from their living room or studio.

Sonus sets a new milestone in the reproduction of the classic organ sound as it effectively combines the unique RAR (Real Audio Rendering) and Physis® technologies, both developed by the Viscount Research & Development department. Physis® is a technology based on the creation of complex mathematical algorithms capable of simulating the physical and acoustical phenomena underlying the generation of sound in the pipe organ. It’s a completely different approach from common digital sound sampling because every single note, every chord, every slightest nuance of the performance is not the result of a simple “playback” of a sound but it stems from a sound generation process which operates fluidly in real time, just as it occurs organically and naturally in a physical instrument. The modeling algorithms that make Physis® organs so unique is the result of a monumental amount of work that now allows the creation of innovative and versatile instruments, redefining the state of the art.

Starting with Physis® sound generation technology, we have designed a revolutionary new audio system called RAR (Real Audio Rendering). The heart of the system is a powerful realtime sound processing algorithm that, in conjunction with four new additional audio channels located at specific points on the console, is able to recreate with great accuracy the acoustic field produced by a real pipe organ in a large reverberant space. Thanks to RAR technology, you can totally manage the impression of three-dimensional space in which the instrument sits all the way up to a large cathedral setting. All this is possible without connecting any additional speakers. The versatility of Physis® technology, together with a painstaking study on the optimization of components, has allowed us to integrate the entire system inside the new organ consoles, in an extremely compact design.

The buttons and tabs to turn registers on and off, the pistons and all the other commands are ergonomically designed to respond quickly and easily to the demands of the user. The display is conveniently located on the side panel with it’s own set of designated controls. The layout is smartly integrated with the instrument to allow unlimited possibility and personalization at the user’s fingertips.