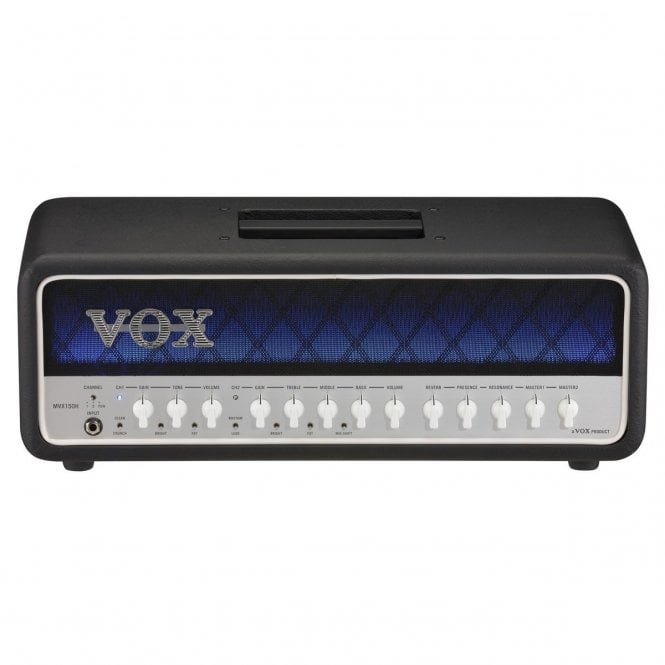 Vox MVX150H 150W Valve Amp Head
The Vox MVX150H 150W Valve Amp Head is the world's first amp to feature Nutube preamp and power amp sections, offering classic vacuum tube tones without the high maintenance. Its newly designed power amp section features NuPower technology, combining the dynamics of the Nutube with the reliability, versatility, and high output of a solid-state amp. The 150W Valve amp is also equipped with 2 channels and a whole host of controllable parameters, allowing players to create everything from clean tones with pristine highs to high-gain saturation with an unbeatable low-end. A wet only output is also included with the two speaker outputs, allowing players to set up a wet/dry rig for the in-built reverb and FX loop. An emulated output is also added, emulating the tones of a mic'd up amp to deliver a realistic sound when recording directly from the amp. Finished off with footswitch capabilities to provide an incredible playing experience, the Vox MVX150H Amp Head delivers the ultimate performance on stage and in the studio.

Vox’s MVX150H Amp Head is the first large tube amp to feature the popular Nutube in both its preamp and power amp sections, delivering the warm, fat sounds of traditional vacuum tubes but without the high maintenance. The Nutubes are designed to be as compact as possible, consuming little power and delivering an incredibly long lifespan. They are designed in the same fashion as conventional vacuum tubes, featuring an anode grid filament structure and operating the same as triode vacuums for an authentic tube amp tone. This setup ensures the MVX150 Amp Head offers the same rich overtones and response as traditional vacuum tubes.

The newly designed power amp section of this Vox amp features NuPower technology, which is built to take full advantage of the Nutube and deliver a sound quality and power output which surpasses conventional tube amps. Combining the Nutube with a solid-state amp, the power amp section offers the stunning dynamics of a tube with the stability, wide range, and high output of a solid state. The Nutubes are set in a push-pull configuration to generate the sag, distortion, and dynamic frequency commonly found on tube amps, along with a true vacuum tube sound and lively dynamic response. This setup ensures the Vox Amp Head delivers a stable operation in any environment, and offers a wide frequency response to ensure players can create everything from clean tones with pristine highs, to high-gain sounds with an unbeatable low-end.

Equipped with 2 channels and a wide selection of controls, the 150W Valve Amp Head provides players with an incredibly wide range of tonal possibilities, offering everything from clean tones to high-gain saturation. Its first channel features clean and crunchy tonal characters, with controls for gain, tone, and volume to dial in your desired sound. Bright and fat switches offer further tone shaping, allowing players to enhance the highs or lows to expand its sonic capabilities. Channel 2 also features bright and fat controls, but is equipped with a 3-band EQ and mid-shift switch to provide excellent control over its rhythm and lead soundscapes. Universal presence and resonance controls are also added, offering adjustments to the amp’s ultra-high and ultra-low frequencies.

Along with its extensive controls, this amp also features Nutube BIAS controls for both channels, allowing you to set the tubes voltage to adjust the response and character of each channel's sound. Experiment with these dials to create a dramatically expanded expressive scoop, and take the amp's tonal character from vintage to modern.

Offers an Incredible Performance in Any Setting

Along with its impressive selection of controllable parameters, the Vox MVX150H is equipped with a range of connections to offer the ultimate performance. Coupled with its two speaker outputs is a Wet Only output, allowing players to set up a wet/dry rig for the on-board reverb and effects loop with ease. An emulated output is also added, offering realistic amp sounds for direct recording. The amp also features a selectable impedance to accommodate a wide variety of speaker cabs, and a power level control to ensure the amp head retains its loudness and distortion at any power level.

To top it off, the Vox MVX150 Valve Amp Head features footswitch capabilities, allowing players to connect 2 footswitches for external control over the amp's functions. Switch between channels, or switch on/off the reverb and FX loop with your foot, or simply change between the two master volumes and instantly change the master volume of the amp. This makes the MVX150H Amp Head ideal for live situations, allowing you to seamlessly transition from rhythm parts to solos and lead sections.