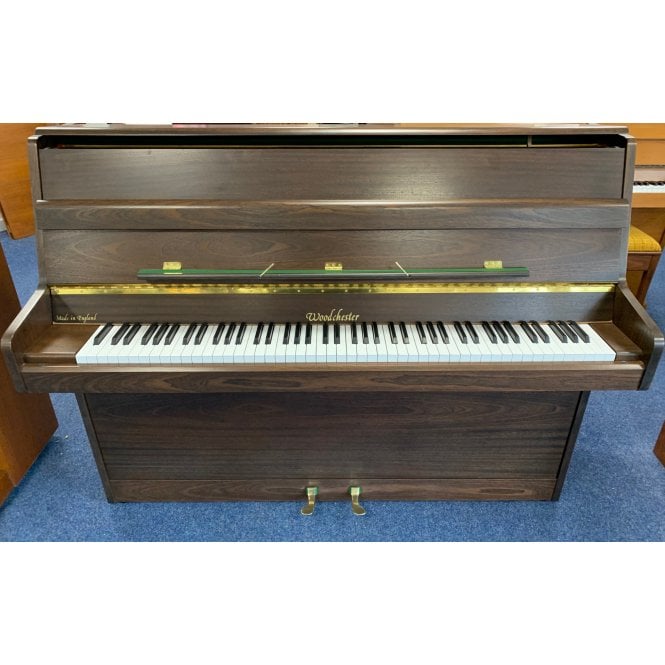 Woodchester 112 Upright Acoustic Piano | Mahogany | Used | Bolton Store
This Woodchester 112 upright piano was manufactured in the UK in approximately 1990 at the Woodchester piano factory. Externally it is in good condition in its mahogany cabinet. There is a little fading on the front and were the 'key fall' has been up. These are hardly noticeable when the key fall is up. There is a little wear & tear but nothing major. Overall this piano looks respectable. Internally this piano is in good condition too, it has been regularly tuned and is at concert pitch. The key action is nice and the tone I would describe as mellow with plenty of depth. This piano is priced to sell and really is excellent value for money.
James - Rimmers Music

About Woodchester Pianos....
The villages of South and North Woodchester nestle in the wooded Nailsworth Valley, in the heart of that well-connected part of the Gloucestershire Cotswolds known as the Royal Triangle.

Home of the famous Roman Pavement, part of a huge 4th century villa complex, Woodchester also boasts a remarkable example of Victorian gothic architecture, Woodchester Mansion. Designed partly by Pugin, architect of the Houses of Parliament, the half-built house stands today as a unique exhibition of 19th century craft skills. Piano making has been carried on at the historic Woodchester Mills site since 1911, continuing a business founded in London eighty years earlier. The move to the Stroud Valleys followed a path trodden by the Arts and Crafts movement, which flourished around the turn of the century. Inspired by the work of William Morris, busy craft co-operatives brought functional, individual design within reach of the ordinary buyer. Today, their products are much sought after by collectors.

Piano manufacture has been continuously carried out at Woodchester Mills since 1911 despite a number of major fires and changes of name and ownership.The valuable craft skills have been preserved down through the years, often handed down from farther to son. Today, the Woodchester Piano Company manufactures a range of quality, hand-built pianos to meet a growing demand for traditional instruments from the home play market, schools and professional musicians, both in the UK and overseas

Awards
In 1997 the Woodchester Elmore model won the prestigious Music Industries Association award for the Best Upright Piano. This accolade was achieved against competition from pianos from all over the world and was the result of a vote taken amongst all the UK retailers.

The award was presented by Mark Fisher, then Minister for the Arts. Our present extensive range represents the culmination of several generations of piano making skills and we are very pleased indeed that our commitment to quality and service has been recognised.

It is with regret that the Woodchester Piano Co,. is no longer producing pianos.