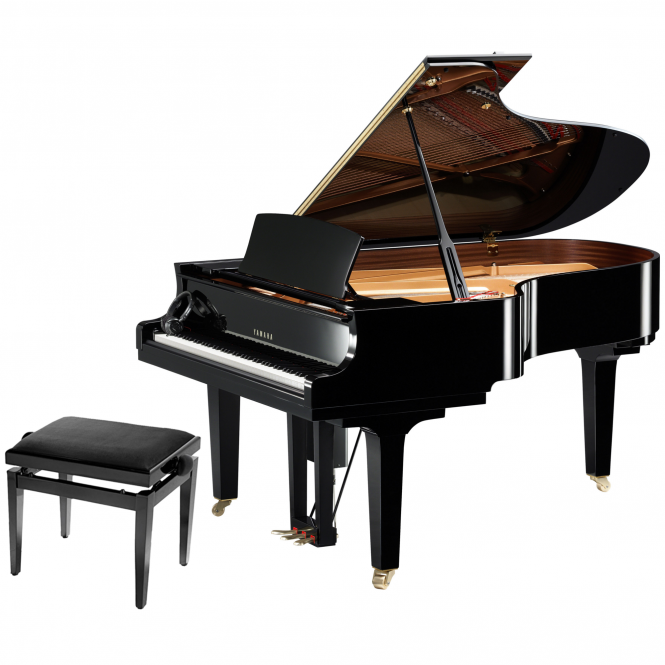 The pinnacle of reproducing technologies, the ENSPIRE PRO offers the highest resolution recording and playback paired with the highest quality acoustic pianos for those who want nothing but the best. DC5X ENPRO consists of a grand piano C5X.

Since its introduction, the Disklavier PRO has been heralded as the finest reproducing piano available. With its refined design, innovative technology and reliable operation, the Disklavier ENSPIRE PRO excels in any environment. As the only system on the market offering high-resolution recording and playback, it has become a staple in institutions and professional recording studios as a must-have music tool. As an instrument that is crafted as beautifully as it can create and recreate a piano performance, it is also an exquisite addition to any home.

A streamlined control panel allows for simple tactile control while remaining hidden from view, providing the elegant look one would expect from a finely crafted Yamaha acoustic piano.

Wireless network connectivity and seamless compatibility with mobile devices, smartphones and computers allows intuitive access to all of the instrument’s exclusive content and unique capabilities.

The Disklavier Enspire Pro allows you to revel in whatever music suits your mood or occasion, from classical solo piano or concerto selections to your favorite jazz or pop songs on piano – accompanied by audio and vocals. An easy-to-use and intuitive UI design provides direct access to 500 built-in songs* and thousands performances that can be downloaded directly to the instrument from the Yamaha MusicSoft online store.

Disklavier Enspire features popular, award-winning and legendary Yamaha artists such as Sarah McLachlan, Bob James, and Jamie Cullum*. These performances are not simply a rendition of the artist’s songs, but exclusive performances by the actual artists themselves, recorded specifically for ENSPIRE. Experience the genuine touch, nuance and emotion as the instrument recreates a precise portrayal of the artist’s intentions.

The Disklavier Enspire Pro is the only instrument with fully integrated high-resolution recording and playback functionality capable of capturing and reproducing 1024 dynamic levels of key and hammer velocity, as well as 256 increments of positional pedaling. Equipped with a cutting-edge optical sensor system that precisely captures every nuanced movement of the keys, hammers and pedals, the Enspire Pro will precisely reproduce the speed of each hammer as it strikes the string, the finest detail of your pedaling, and even the velocity of your key release.

Our Silent Piano technology allows you to listen, learn and play without being disturbed or disturbing others. Utilizing a unique sampling technique that replicates the interaural characteristics of the human ear, the Disklavier Enspire binaurally recreates the sound, presence and resonance of a Yamaha CFX Concert Grand from the player’s position through headphones. This innovative technology is built into every Enspire Pro Disklavier piano, giving you increased flexibility and more opportunities to enjoy your piano.