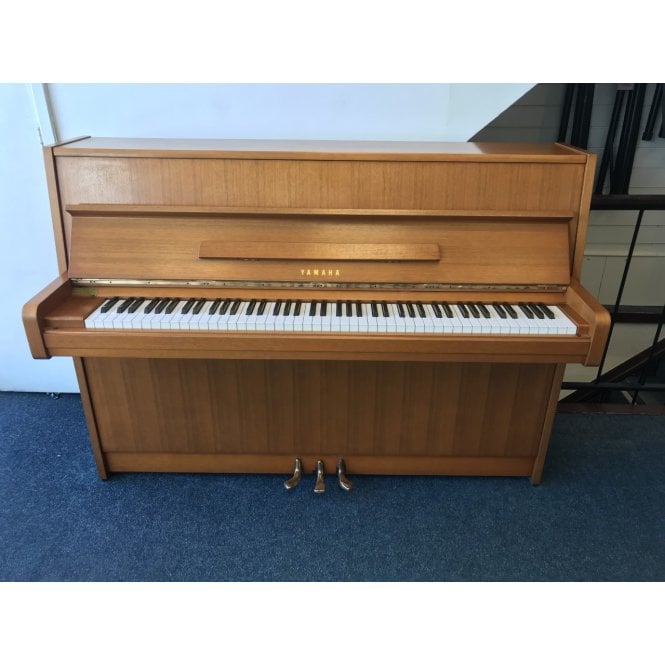 This Yamaha Mj series upright piano is a very compact model , it would fit into many living rooms very easily. It has a serial number of 1448894 which dates it a 1972 model made in the Yamaha Hamamatsu factory in Japan. And as such has a wonderful pedigree of Yamaha Japanese craftsmanship within it. It is in excellent condition for its age , having been regularly tuned throughout its life. It has a very big and bright sound for such a small piano ! This model is off course overstrung and under dampened and has 3 pedals , the middle one being a practice pedal for quieter evening practice. The action has a medium feel to it , but very nice to play and responsive.

The piano is Used but as I said it is in very good condition as you can see from the photos . There are some very minor blemishes / signs of wear due to its age , and there is a slight scratch on the right hand side , half way down , but nothing very noticeable.
Andrew Lord - Rimmers Music

At the start of the 1960s, Yamaha made a major move, creating a new company in the U.S.A. to import and distribute its pianos: Yamaha International Corporation. By 1965, Yamaha was producing more pianos than any other manufacturer.In that same year, Cesare Tallone, one of Europe’s most respected piano technicians, came to Japan and visited the Yamaha factory. Deeply impressed by its facilities and employees, he elected to work with the company on the development of a new world-class concert grand. Over the next two years, Yamaha craftsmen-built prototypes that were evaluated by several highly regarded pianists; their feedback was then incorporated into further new designs. Finally, in November 1967, the CF concert grand piano was unveiled during a banquet at Tokyo’s Hotel Okura. Playing the piano on that occasion was Wilhelm Kempff, who went on to call it “one of the top pianos in the world.”

In 1991, Yamaha reached the impressive manufacturing milestone of five million pianos. The company also introduced the successor to its CF and CFIII concert grand pianos: the CFIIIS, which underwent two further upgrades in 1996 and 2000. At the Moscow Conservatory in July 1998, a