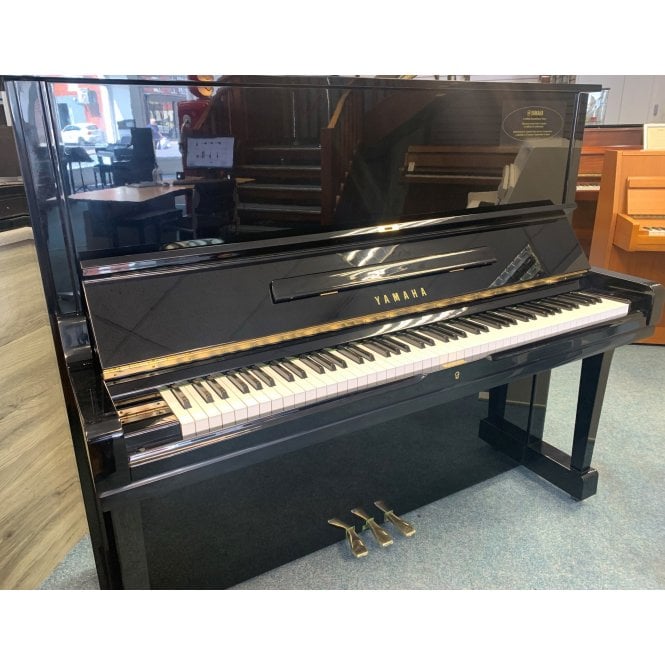 Code: Yamaha U3 Upright Piano | Polished Ebony |Refurbished by Yamaha | A4195032
Item in Stock Item out of Stock | Usually dispatched within 24 hours
Loading...
Low Finance OptionsFrom £73.74£73.74 per month - Learn More. using Classic Credit 48 Months 19.9% (based on a £2,498.00£2,498.00 max. deposit)
Award Winning Retailer Est 1978 Supplying Musical Instruments For Over 30 Years
Prices Checked Daily Buy Today With Confidence
14 Day Return Policy We have made the process as simple as possible
Part Exchange Welcome We can offer you part exchange on your used items

Yamaha U3M Upright Piano | Polished Ebony |Refurbished by Yamaha | Leyland
This Yamaha U3 piano was manufactured by Yamaha in Japan between 1985 to 1989. This piano has been refurbished by Yamaha. It comes with a certificate to prove authenticity and a 5 year Yamaha Guarantee. Externally this piano looks great in its black polished ebony finish. There are a few minor usual wear and tear duster marks but nothing significant. I have taken pictures for you to see. The brass finishes and 3 brass pedals (the middle one being a practice pedal whereby this pedal puts a felt between the hammers and strings to quieten down the sound) all look beautiful. Internally this piano is great. It is at concert pitch and has been refurbished to the highest standard by Yamaha in their factory. The action is nice and responsive and it has a lovely depth to its tone with excellent dynamics (as you would expect from the Yamaha U3). I think this piano is excellent value for money.
Martin - Rimmers Music