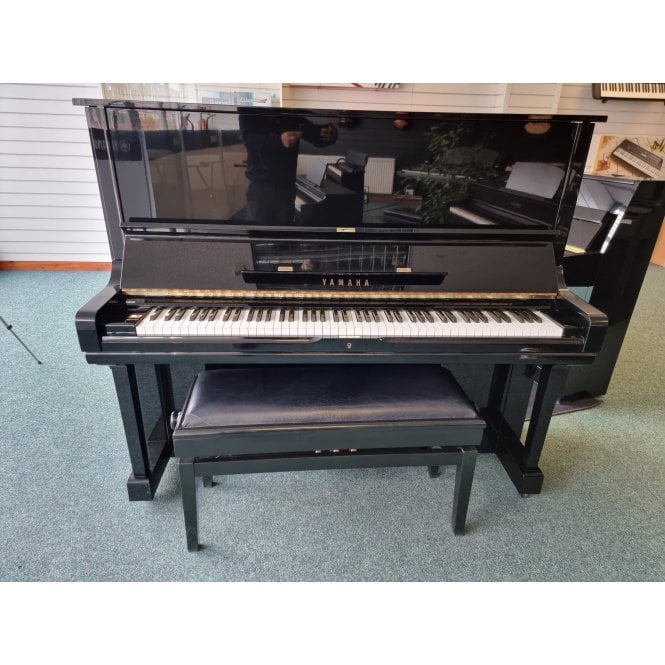 The Yamaha U3 is a fantastic upright piano which is manufactured at Yamaha's Hamamatsu manufacturing facility in Japan. The sound is very characteristic and lends itself very well to any type of music that you want to play. The condition is good, with marks and scratches consistant with a used piano however this is still a stunning instrument. It plays very well and offers fantastic feedback. The piano will be checked and tuned before despatch and a duet adjustable bench as pictured is included.
Barry - Blackpool Store

More About Yamaha Pianos
The characteristic sound of Yamaha pianos can be heard today in concert halls, recording and rehearsal studios, houses of worship, and in educational institutions worldwide.

This success story was far from immediate; actually, it has been more than a hundred years in the making. Here is a brief history that shows how one man’s dream to craft the world’s finest concert grand pianos came to fruition, thanks to the efforts of a century’s worth of expert craftsmen and musicians.

Yamaha Corporation was established in 1887 as a piano and reed organ manufacturer by Torakusu Yamaha in Hamamatsu, Japan. The company's beginnings as a musical instrument manufacturer are still seen today in the group's logo—three of interlocking tuning forks.

1900 – 1949
The first piano to be made in Japan built in 1900.  It was an upright piano made by Torakusu Yamaha, founder of Nippon Gakki Co., Ltd. — later renamed Yamaha Corporation. Just two years later, the Nippon Gakki factory produced its first grand piano. During this initial period, the company was focused on manufacturing instruments for the Japanese market, where appreciation for Western classical music was still relatively new. Nonetheless, Torakusu did send one of his pianos to the 1904 St. Louis World’s Fair, where it earned an Honorary Grand Prize.

By the 1920s, Yamaha craftsmen were traveling overseas regularly to learn the latest European piano production techniques. In 1926, the company asked Ale Schlegel, an expert piano technician from Germany, to meet with the craftsmen at the Nippon Gakki facilities in Hamamatsu, Japan to discuss piano making in extensive detail. Schlegel’s advice yielded a superior and improved product. In a short time, well-known European pianists were taking notice of Yamaha instruments, among them Leo Sirota and Arthur Rubinstein.

1950 – 1959
In 1950, Yamaha released the FC concert grand piano to great praise. Encouraged by that model’s success, the company built one new facility after another in its continuing mission to build an even better piano. In 1956, the company finished work on Japan’s first computer-controlled artificial drying room, where the moisture content of wood — a critical factor for any piano — can be adjusted to the optimum level after the natural drying process is concluded. In 1958, Yamaha established a grand piano assembly line at its Hamamatsu headquarters.

1960 – 1969
At the start of the 1960s, Yamaha made a major move, creating a new company in the United States, to import and distribute its pianos. By 1965, Yamaha was producing more pianos than any other manufacturer.

In that same year, Cesare Tallone, one of Europe’s most respected piano technicians, came to Japan and visited the Yamaha factory. Deeply impressed by its facilities and employees, he elected to work with the company on the development of a new world-class concert grand. Over the next two years, Yamaha craftsmen-built prototypes that were evaluated by several highly regarded pianists; their feedback was then incorporated into further new designs. Finally, in November 1967, the CF concert grand piano was unveiled during a banquet at Tokyo’s Hotel Okura. Playing the piano on that occasion was Wilhelm Kempff, who went on to call it “one of the top pianos in the world.”
The CF, along with the simultaneously introduced C3 grand piano, took the world by storm — with a little help from an all-time great. Sviatoslav Richter first encountered a CF at a January 1969 concert in Padua, Italy. The Russian maestro chose to play one again later that year at the Menton Music Festival in France, after plsying several pianos from different manufacturers during his rehearsals. Richter played (and praised) Yamaha pianos from that point on, marking the beginning of a lsting relationship with the company that would endure for the rest of his life.

1970 – 1979
During Sviatoslav Richter’s first Japanese tour in 1970, he performed at the Osaka World’s Fair on a CF that had the serial number 1000000 which is the one-millionth piano manufactured by Yamaha. Slowly but surely, European music festivals adopted the CF as their official piano, including the Antibes, Saint Tropez and Menton Festivals in France.

1980 – 1989
Another legendary pianist, Glen Gould, was drawn to Yamaha in 1980. He purchased two CFs that year and used them on the last three albums he made before his tragically early death in 1982 at the age of 50. This includes his second reading of J.S. Bach’s Goldberg Variations, which is now regarded as an all-time classic.

With new concert halls popping up all over Japan at that time, Yamaha craftsmen were motivated to develop a concert grand piano for a new generation. Building on the CF’s achievements, they again went to work developing a series of prototypes, each of which was evaluated by top pianists. Krystian Zimerman was so happy with his that he brought it with him on a European tour. After further advancements, Yamaha craftsmen unveiled the CFIII in 1983 and it was an instant hit.  The CFII was designated as the official piano of East Germany’s International Johann Sebastian Bach Competition, Poland’s International Chopin Piano Competition and the Soviet Union’s International Tchaikovsky Competition.
Yamaha also invented a new kind of piano in the 1980s with the Disklavier, which made its American debut in 1987 (an earlier model dubbed the Piano Player was introduced in Japan in 1982). Originally produced as an acoustic piano equipped with electronic controls for recording and playback, it has been updated and refined as technology has evolved in the decades since.

1990 – 1999
In 1991, Yamaha attained the impressive manufacturing landmark of five million pianos. At that time the company also introduced the successor to its CF and CFIII concert grand pianos: the CFIIIS. At the Moscow Conservatory in July 1998, a Russian pianist named Denis Matsuev won the International Tchaikovsky Piano Competition’s top prize performing on a Yamaha CFIIIS.

2000 – 2009
The Japanese music community celebrated in 2002 when Ayako Uehara won the 12th International Tchaikovsky Competition. She was both the first Japanese winner and also the first female winner in the history of the contest — and she won it playing on a Yamaha CFIIIS. A decade that marked the 100th anniversary of Yamaha’s piano production also saw the CFIIIS be adopted as the official piano of more than 20 major international competitions.

2010 – Present
After 19 years of research and development, the Yamaha CF Series concert grand piano, successor to the CFIII, debuted in May 2010. Later that year, the winners of both the National (U.S.) and International Chopin Piano Competitions made history playing a CFX piano. In 2016, Yamaha commemorated the Disklavier’s 30th anniversary by releasing its seventh iteration, the ENSPIRE. In that same year, Yamaha was awarded a prestigious “Top 100 Global Innovator” award from Thomson Reuters for the third year in a row. 2017 is marked by the launch of the SX Series, a premium grand piano line incorporating A.R.E., the wood-reforming process that was used in top product lines of other Yamaha divisions.